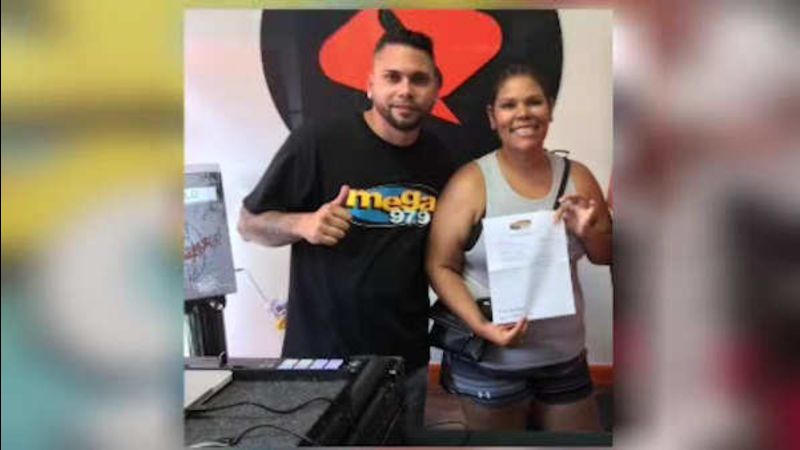 BOONTON, New Jersey (WABC) -- Jeanette Camacho thought she hit it big, winning tickets to one of the biggest concerts in town. But when the New Jersey resident went to collect, a local radio station only had bad news -- no tickets, and no show.

That's when she called 7 On Your Side to make some sense out of this musical mess.

The promotion by the most-listened to radio station in our area, La Mega, was giving away tickets to see Marc Anthony at Radio City Music Hall. But Camacho said the station went radio silent on her.

Anthony is a multi-platinum performing artist who has fans all over the world, but Camacho believes she's his biggest. She listens to him all the time, while working out and in her car on her favorite radio station 97.9. So when she won the contest, she was ecstatic.

"Eventually, they got to the Marc Anthony tickets," she said. "And they got my number, and I won."

She flashed her winning smile standing next to La Mega's DJ Carlito, planning to take her mom to the concert for helping her get through school.

With her winning letter in hand, she drove into the city from Newark twice to collect her prize at the station. But Jeanette says La Mega's promise turned into a mega bust.

"They said, 'Oh no, we ran out of tickets we have no more tickets,'" she said.

She was furious and ranted on the popular radio station's Facebook page, posting her prize photo and asking for her tickets.

Finally, La Mega gave her a consolation prize: Two tickets to see Salsa Vive. But to make matters worse, the tickets were in nosebleed territory and 14 seats apart.

That's when Camacho got 7 On Her Side, and we asked the radio station to do better. They responded with four tickets and meet and greet with El Gran Combo de Puerto Rico.

We could tell it was a disappointment, yet Camacho was too polite to seem ungrateful. So we went back to La Mega again to see if they would honor the original prize. We surprised Camacho at her job with two tickets for February's Marc Anthony concert at the Prudential Center in Newark.

La Mega's representative apologized for the problem, saying free concert ticket mix-ups are rare. Then, a rep at their corporate office in Miami called and quickly made good within hours of our call. And yes, she is still taking her mother to the concert.
Related topics:
concertmusic7 on your side
Copyright © 2022 WABC-TV. All Rights Reserved.
7 ON YOUR SIDE
7 On Your Side helps rescue deposits for NJ apartment fire victims
Baby formula scams are skyrocketing: How to avoid getting duped
United cancels couple's flight, charges $4K more for same seats
529 Plans - How they can help you save/pay for college
TOP STORIES
Onlookers urged police to charge into TX school: 'Go in there!'
Vigil held for 19 children, 2 teachers killed in TX school shooting
3 homicides in 3 hours in Brooklyn, police search for gunmen
Car fatally hits 1-year-old girl, injures mother on Staten Island
Adams to meet with NYC business leaders in wake of subway shooting
NYPD officers reunited with blind man they rescued from subway tracks
AccuWeather: Clouds return, PM shower possible
Show More
Uvalde school shooting: What we know about 19 kids, 2 teachers killed
After shootings, Hochul looks at raising age for guns in NY
Former Capital Cities/ABC Chairman and CEO Tom Murphy dies at 96
Alleged shooter in unprovoked subway murder ordered held without bail
NYC mayor, chancellor call on parents to take role in school safety
More TOP STORIES News