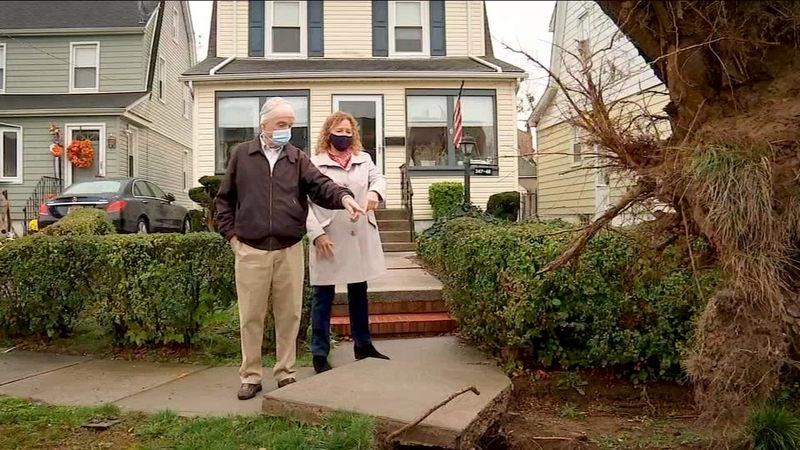 BELLEROSE, Queens (WABC) -- Tropical Storm Isaias toppled thousands of trees in the Tri-State area, many of which had been cleaned up.

But nearly three months after the storm, an 86-year-old homeowner in Queens was still left with a mess in his front yard, That's when he called 7 On Your Side's Nina Pineda.

Entire slabs of concrete were suspended in mid-air in front of Pete Brennan's home by the hulking roots of a century-old ash tree that was toppled by the storm back in August.

The hulking tree towered over the Brennan's home since the family moved to Bellerose in the mid-60s.

But now 55 years later, Pete's dealing with a decimated driveway.

Because of it, the widower was forced to search the streets for a parking spot.

"Very inconvenient," he said. "I have a heart problem."

Since the tree's roots were between the sidewalk and the street, maintenance is the city's responsibility.

So when the tree fell and blocked the street, the city did step in. A crew cut it up and carted it away, but they left behind a stump that stuck out into the street.

"Especially for my father-in-law, who would come home every day and have to look at this and worry about it, that someone is going to get hurt," Monica said.

Pete said he and his neighbors called 311 more than a dozen times, and Monica appealed to a state senator and their local councilmember, but he says they got "silence from the city."

So Nina Pineda and 7 On Your Side got involved, contacting the New York City Department of Transportation, the Parks Department, and Mayor Bill de Blasio's office.

They seemed to spark some action from the city, as surveyors were first seen spray painting the cement slabs, marking it for removal.

Then finally a city contractor ground down the stump and filled the hole with recycled wood chips.

Finally, another contractor carted away the concrete and poured a new sidewalk and driveway.

Nearly five months after the storm, Pete had his driveway back.

"Thank you very much your help was greatly appreciated," Monica said.

A representative from the Parks Department said the storm toppled more than 3,600 trees in the city, making it the third most damaging storm of the decade.

Homeowners should know that they can hire their own independent contractors for sidewalk repair and then file for reimbursement through the city comptroller's office.

7 On Your Side's Nina Pineda has more on credit card interest rates and balance transfers.