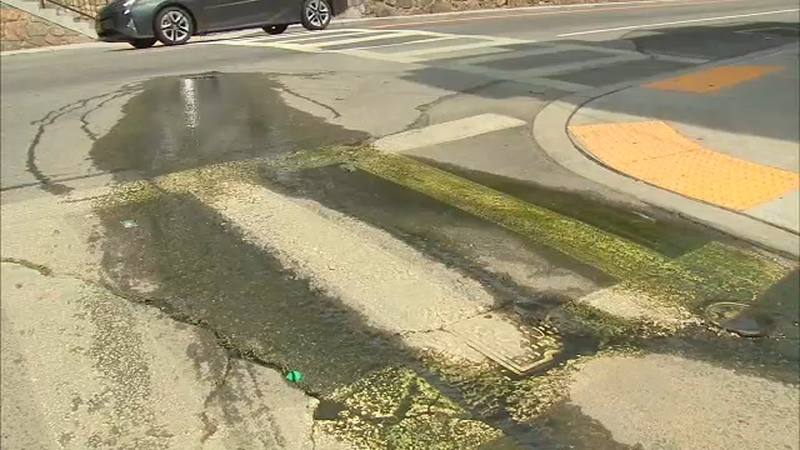 PEEKSKILL, New York (WABC) -- There's a P.U. in Peekskill. For more than a month , a Westchester County resident has had held her nose, dealing with the horrendous smell from a sewage leak in front of her home, she fears won't end.

The stench is steady stream of raw sewage, cooking in the heat of the street right front of her apartment on Main Street in Peekskill.

Dillard has been dealing with the disgusting leak since July 4th when a green stream began seeping from the middle of the intersection and running down her block.

She has to keep her little boy from stepping in the filthy feces laden puddles.

"As you can see it's causing the street to turn green," says Dillard. "It has the smell of rotten egg. It breeds mosquitoes. I can smell it in my house."

She called Peekskill's DPW and says a supervisor investigated and found her one of her neighbors was responsible.

"The city ordered them to fix and gave them a certain amount of time, and they went and got a lawyer," says Dillard.

So for the last month and half while her neighbor fights it out with the town, Dillard can't work.

Dillard is forced to keep her windows shut, making it sweltering hot in her apartment where she produces a video blog.

Dillard says calls and complaints to the town netted zero results. So, at the end of July - she texted Peekskill's mayor who said, 'I'll see what I can do.'

Then when she texted him more than a week later asking for an update. Mayor Andre Rainey wrote, 'I don't know what you're talking about.'

"I came back from vacation it's still like this," complains Jasmine. "We are desperate for this health hazard to be fixed."

So when Dillard called 7 on your Side, and we contacted the mayor, he deferred to his city's DPW department.

Within two business days, crews went to work digging up the pavement, repairing the leak.

"I yelled out the window 'it's about time,' because I was so happy!" says Dillard.

Now, the green streets gone, and so are the bugs!

So who is responsible for the fix? Peekskill's rep said Dillard's neighbor, who has to fix it. It's because the city found the leak in the sewage line leading from Dillard's neighbor's house to where it connects to the city's line in the street. Weeks ago, the city sent an emergency order to the homeowner asking him to fix the leak. But the city's rep says instead of fixing the problem, the homeowner denied it was his responsibility. But, after our calls, the city performed the emergency repairs and will send the neighbor a bill for the repairs.

If using the app, click here to send us a news tip
Report a correction or typo
Related topics:
societypeekskillwestchester county7 on your sidesewage spill
Copyright © 2022 WABC-TV. All Rights Reserved.
7 ON YOUR SIDE
Tips winterize your home and keep gas, electric bills low
How to get reimbursed for at-home COVID tests
7 On Your Side: Tips for ordering your free at-home COVID tests
Woman wrongfully fined $259K for neighbor's violations in NYC
TOP STORIES
Winter Storm Update: Tracking the nor'easter
New Yorkers urged to prepare for snow, wind as nor'easter looms
Wake for NYPD Officer Rivera being held at St. Patrick's Cathedral
Parents livid after 9-year-old girl left locked outside school in cold
Holocaust letter detailing family's death found at NY flea market
Missing NJ mom, 2 young kids found safe, won't be returning home
Mayor Eric Adams vows change amid surge of NYC violence
Show More
Car hits NYC restaurant, which is burglarized the next night
100 bags of fentanyl found in bedroom of 13-year-old who died from ...
Missing NYU adjunct professor found safe at hospital
AccuWeather Alert: Nor'easter approaching
Man sentenced to 25 years to life for attempted murder of 4 officers
More TOP STORIES News
Send us your questions, issues, and story ideas to Nina by filling out the form above, by emailing 7OnYourSideNina@abc.com, or contact Nina on her Facebook page or tweet her at Twitter @7OnYourSideNY! You can also call the 7 On Your Side Hotline at 917-260-7697.