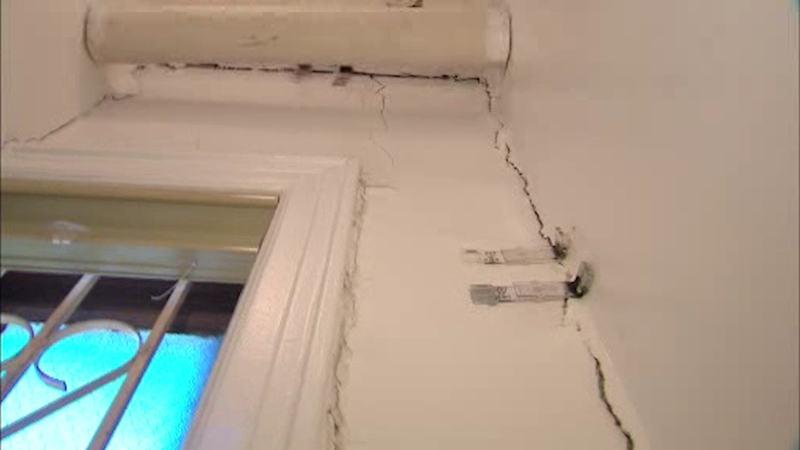 CHELSEA, Manhattan (WABC) -- Tenants say everyday is like a scene from a disaster movie. Huge cracks getting bigger on their walls and floors rapidly sloping, it's all part of a worsening condition that tenants say is dangerous. But you won't believe who they think is responsible.

Wall Cracks, ceiling crevices, and gaping gaps in the floor. The banging of construction next door to Christina Williams pre-war walk-up in Chelsea is raining debris on her daily and that's the least of the renter's worries.

"I don't sleep well because I think could my building collapse," said Christina Williams, a tenant.

You can feel the floor is sloping she said over the past six months. It has started to separate from wall you can see the crack in the baseboard here. 7 On Your Side put a can on one side of the bedroom and there it went, rolling down.

Downstairs in the Guitar shop, the damage was even more obvious.

"They jack hammered right through my wall like a prison break," said Paul Nieto, the owner of "Guitartech".

He says he opened up one day and found a construction worker inside his store.

"You could see daylight there was a big huge hole, and he was trying to repair it bricking it up," Nieto said.

A few months later, he says welder started a fire in which he lost several of his customer's valuable guitars.

"I was told I would be reimbursed," Nieto said. "I haven't seen a dime."

7 On Your Side invited NY State Senator Brad Hoylman to see what his constituents are dealing with.

"It's a safety hazard, it's a heath hazard it's unacceptable," Hoylman said.

Tenants pointed out window braces and meters the developer from next door placed on their walls and ceilings.

"But no one ever comes to monitor them," Williams said.

And they complained to the senator their landlords have been no-shows on repairs or helping them.

"We've seen a pattern all across Manhattan of landlords trying to get use construction to get rent-stabilized tenants out of their homes and convert them to market rate," Hoylman said.

So 7 On Your Side appealed to the City Department of Buildings to send out inspectors. We followed on their tour with the contractor, and two representatives from the landlord.

The landlord's engineer voiced his own safety concerns.

"If these walls are not stabilized the building could be at risk. (And what you're recommendation sir?) Stop construction stabilize the walls," said Michael Notaro, an engineer.

Within hours of that inspection, the city changed the construction from a partial to a full stop work order.

SW Management said in no way are they attempting to drive their rent stabilized tenants away from there, but admitted they had no safety plan in place even after tenants here have been complaining for the last six months about the worsening conditions.

The developer - Adellco - told 7 On Your Side they're working with the tenants to resolve their issues.

The building will have joists installed to stabilize before work here can continue.