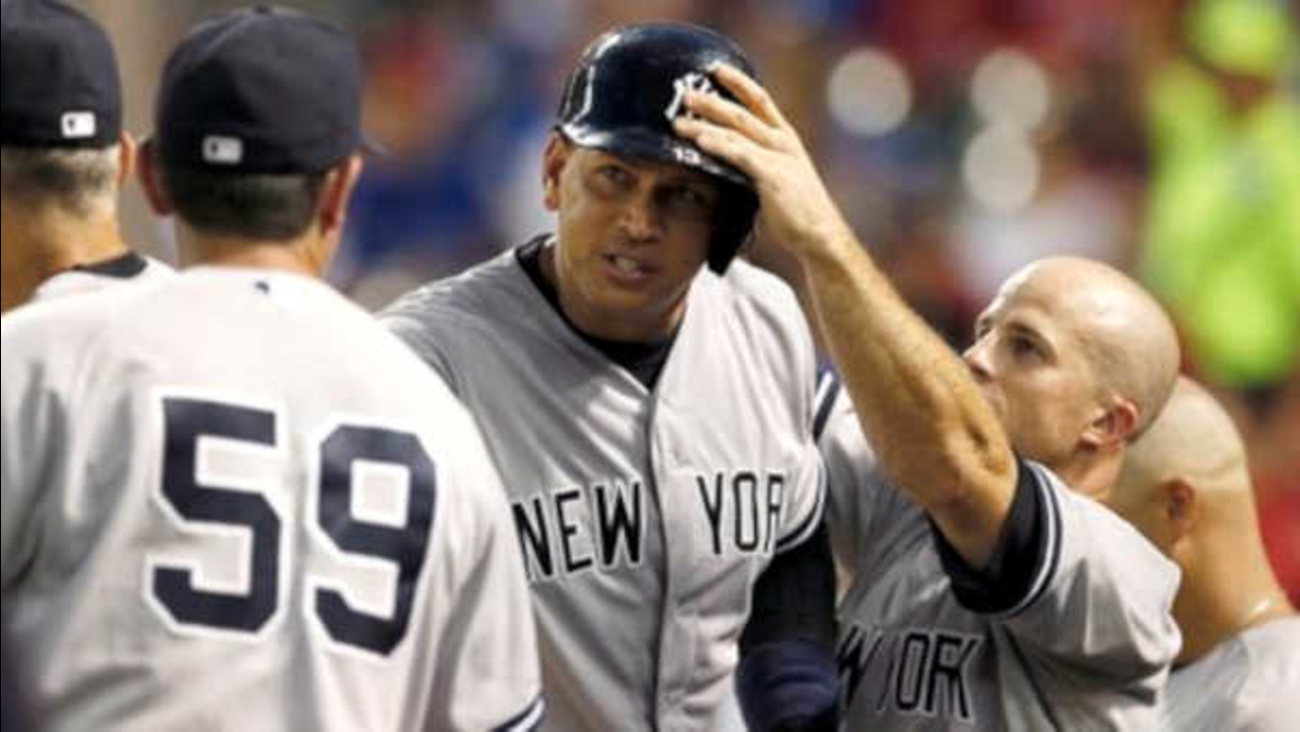 ARLINGTON, Tx. -- Alex Rodriguez is hitting home runs in his 40s, just like he did as a teenager.

A-Rod marked his 40th birthday Monday night by homering for the New York Yankees against Texas, the team that gave him his first huge contract.

His sixth-inning drive off Matt Harrison was his big league-best sixth on his birthday, according to STATS, breaking a tie with Todd Helton, Chipper Jones, Derrek Lee and Al Simmons.

He joined Ty Cobb, Rusty Staub and Gary Sheffield as the only players to homer as teenagers and at age 40 or older.

Rodriguez doesn't remember any clubhouse conversations as a young player about still being in the game at 40 years old.

"You talk more about 35, coming into your mid-30s. Forty's not really talked about," Rodriguez before the game. "So, sure, there's a certain amount of pride."

On his 39th birthday a year ago, Rodriguez was serving a season-long suspension for violations of baseball's drug agreement and labor contract.

"I had a lot of time to think and evaluate. It was a dark time, for sure," Rodriguez said. "To be able to come back this year and look back, and hopefully I'm going to be a better player but more importantly a better person for the next 40 years."

When asked what a 40-year-old A-Rod would tell the 30- or 20-year-old A-Rod, he first said he wasn't in position to give anyone advice, including himself. But he then said there was a point in time when hitting home runs and being a great player were all that mattered to him.

Rodriguez has 24 homers this season, including three in his previous game, Saturday. His is fourth on major league's career list with 678, has reach 20 for the 16th time and homered against Detroit on June 19 for his 3,000th hit.

Yankees manager Joe Girardi said Rodriguez is extremely productive and re-established himself as an everyday player.

"I'm going to continue to work hard. I thought April would be my most challenging month. Then as I started getting more repetition, I was hoping to get better and I think that's happened," Rodriguez said. "It's also a nice reminder to me that if you play clean and you work hard, that good things can happen."

Rodriguez has been with the Yankees since 2004. Just before spring training that year he was traded by Texas only three seasons into the $252 million, 10-year contract he signed after starting his career with Seattle from 1994-2000.

During his three seasons in Texas, he was a three-time All-Star while hitting 156 homers with 395 RBIs. He got a $275 million, 10-year contract from the Yankees after the 2007 season.

In February 2009, Rodriguez admitted to using steroids while with the Rangers from 2001-03.

"The fans (in Texas) were always incredible to me. I will always be grateful to (former owner) Tom Hicks and the Rangers for giving me an opportunity at 25 years old to be the leader of a franchise," he said. "I learned a lot here. I was 25 years old. I was a young kid here, and I had a good time. I tried to do my best as a leader. I did the best I could."