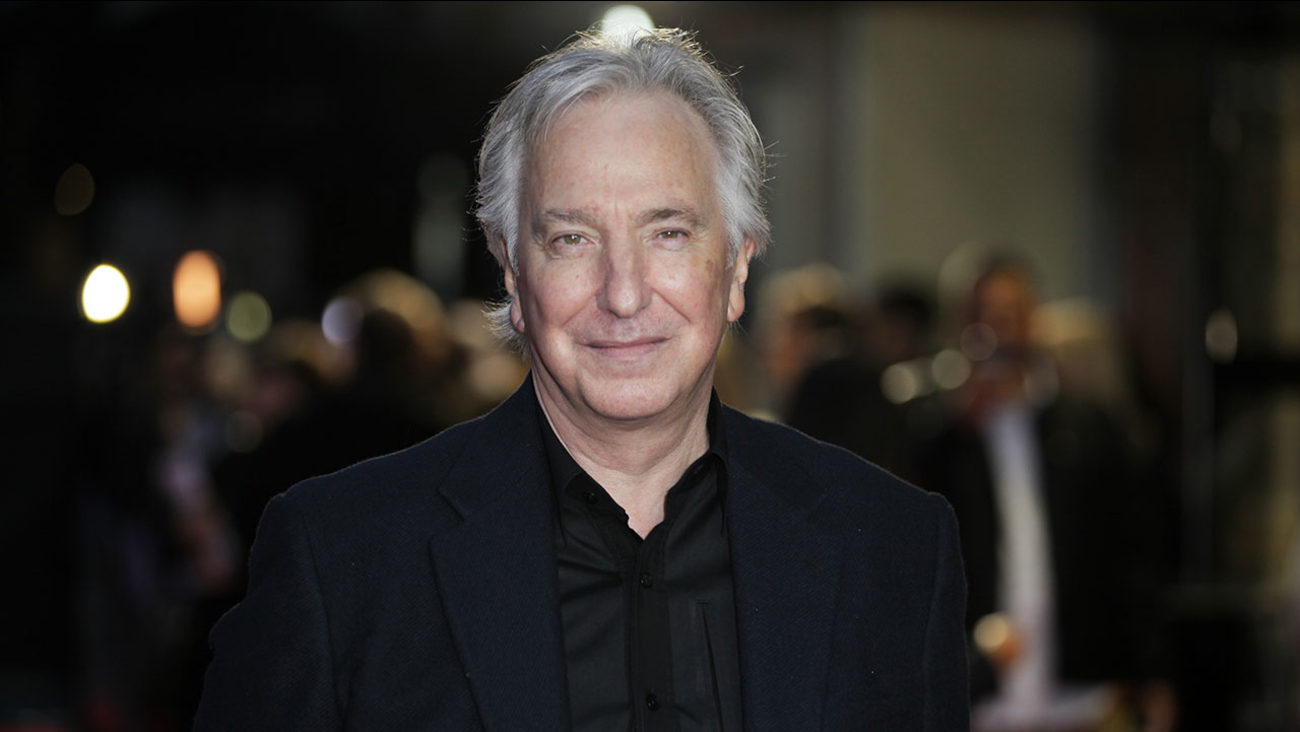 Actor Alan Rickman, known for his villainous roles such as Snape in ''Harry Potter'' and Hans Gruber in ''Die Hard,'' has died at age 69. (Grant Pollard/Invision/AP)

LONDON -- British actor Alan Rickman, a classically trained stage star and sensual screen villain in the "Harry Potter" saga and other films, has died. He was 69.

Rickman's family said that the actor died early Thursday in London after a battle with cancer.

Daniel Radcliffe, who played opposite Rickman in eight "Harry Potter" films, said Rickman was "undoubtedly one of the greatest actors I will ever work with."

Born to a working-class London family in 1946 and trained at the prestigious Royal Academy of Dramatic Art, Rickman was often cast as the bad guy; with his rich, languid voice he could invest evil with wicked, irresistible relish.

Film roles included Hans Gruber, the psychopathic villain who tormented Bruce Willis in "Die Hard" in 1988; a deceased lover who consoles his bereaved partner in 1990's "Truly Madly Deeply"; the wicked Sheriff of Nottingham in "Robin Hood: Prince of Thieves" in 1991; and a wayward husband in 2003 romantic comedy "Love Actually."

Millions know him from the Potter films, in which he played Hogwarts teacher Severus Snape, who was either a nemesis or an ally - possibly both - to the titular teenage wizard.

Radcliffe, who played Harry, said Rickman "was one of the first of the adults on Potter to treat me like a peer rather than a child. Working with him at such a formative age was incredibly important and I will carry the lessons he taught me for the rest of my life and career."

Harry Potter creator J.K. Rowling tweeted that "there are no words to express how shocked and devastated I am to hear of Alan Rickman's death. He was a magnificent actor (and) a wonderful man."

Emma Thompson, who starred alongside Rickman in films including "Sense and Sensibility" and "Love Actually," praised Rickman's "humor, intelligence, wisdom and kindness" and called him "the finest of actors and directors."

"I couldn't wait to see what he was going to do with his face next," she told Newsweek.

"His sheriff was a gloriously nasty character who it was easy to love to hate and who he appeared to have great fun playing," Saghir said.

Rickman's villains were memorable, and included an Emmy-winning turn as "mad monk" Rasputin in a 1996 TV biopic.

He had a sideline in comic sci-fi, bringing knowingness and fun to the spoof "Galaxy Quest" in 1999 and delivering existential ennui as the voice of Marvin the Paranoid Android in "The Hitchhiker's Guide to the Galaxy" in 2005.

"I so wish he'd played King Lear and a few other classical challenges but that's to be greedy," actor Ian McKellen wrote on Facebook. "He leaves a multitude of fans and friends."

Rickman was also a filmmaker, directing and co-starring opposite Kate Winslet in 2014 costume drama "A Little Chaos." Seventeen years earlier, he'd directed Emma Thompson and her mother Phyllida Law in "The Winter Guest."

In 2005, he directed "My Name is Rachel Corrie," a play based on the diaries of an American pro-Palestinian activist killed by an Israeli bulldozer in the Gaza Strip.

Sigourney Weaver, who starred with Rickman in "Galaxy Quest" and the 2006 film "Snow Cake," said the project was an example of the way Rickman "used his talent always to make a difference."

Frequently charming in person, Rickman was, by his own account, uncompromising as an actor. During the filming of "Harry Potter," he maintained Snape's air of haughty disdain even off-camera.

"The animal in me takes over," Rickman told The Associated Press in 2011 when he appeared on Broadway in Theresa Rebeck's play "Seminar."

"You're as polite as possible, but it's not always possible."

Rickman is due to appear in two yet-to-be-released films: "Eye in the Sky," with Helen Mirren and Aaron Paul; and the animated "Alice Through the Looking Glass," in which he voices the Blue Caterpillar.

Rickman is survived by his partner of 50 years, Rima Horton, whom he married in 2012. Funeral details weren't immediately available.