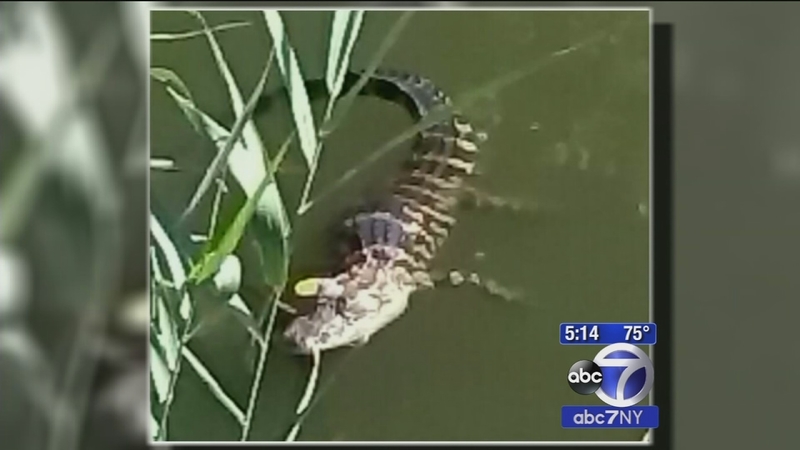 FLUSHING (WABC) -- A rare afternoon sighting to say the least - an alligator was spotted near Meadows Lake on Monday afternoon, and at last report, it's likely still in the general area.

A fisherman says he spotted the gator and knew rather quickly the elusive creature wasn't from around here.

"Thought it was a rat at first. The closer I looked, I realized it was a gator," fisherman Joe Genovese said.

The sighting happened in a waterway that runs through Flushing Meadows - Corona Park and feeds into Meadow Lake.

Members of the Emergency Service Unit responded to the scene and attempted to catch the reptile, which appears to be about 2 feet long.

They tried, but no luck.

"I'll catch him if they don't catch him, there's no doubt about it," Genovese said. "The best chance of getting it is by snagging it. You won't hurt it. Snag it by the tail, bring it in"

But how did it get here?

"A lot of people bring 'em up as pets, then dump them. They eat everything in the pond the native fish, the birds," he said.

NYC Parks' Urban Park Rangers, working in conjunction with Animal Care and Control, will continue to monitor the site and attempt to capture the gator using nets, snare poles, and traps.