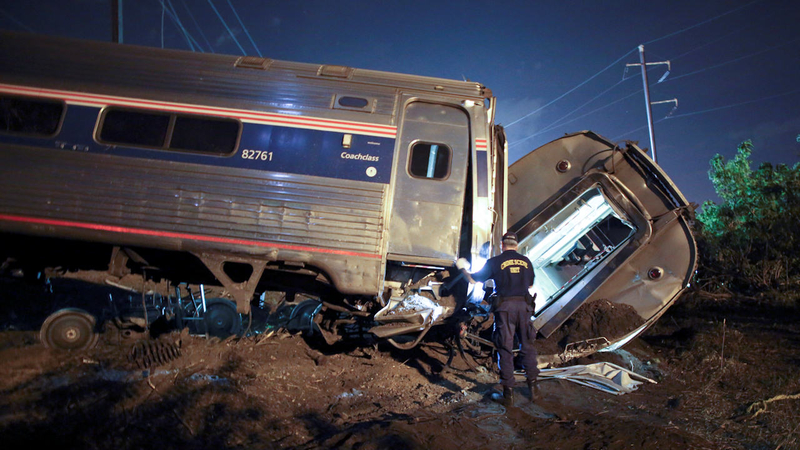 PHILADELPHIA (WABC) -- The NTSB has concluded that a "distraction" caused the engineer of Amtrak 188 to lose situational awareness prior to last year's deadly derailment in Philadelphia, according to sources.

Sources say part of the reason the train derailed was due to engineer Brandon Bostian being distracted by radio traffic about a rock throwing incident involving a SEPTA train.

Officials will hold a board meeting Tuesday to discuss the findings, and they are expected to announce the presence of contributing factors that made the crash worse.

Authorities eliminated a number of potential causes for the distraction, such as a cell phone, but it's believed radio communications caused the distraction. They will say it is also clear that positive train control would have prevented the accident.

Sources say, according to the NTSB's findings, Bostian was worried because a friend had lost partial eyesight in a rock throwing incident.

As for the train's crash worthiness, officials are expected to announce that there were issues with the emergency windows and that window ejections resulted in fatalities.

The NTSB is expected to issue a number of recommendations, including ways to increase safety measures and increased training.

The May 2015 crash killed eight people and injured 200. The New York-bound Northeast Regional train entered a sharp curve at 106 mph - more than twice the speed limit - before careening off the tracks.

The railroad has apologized for the crash and an emotional Amtrak CEO Joseph Boardman told Congress afterward that Amtrak was responsible. The train's engineer has said he couldn't explain why the train kept accelerating after he applied the brake.

According to a previously released transcript of his interview with federal accident investigators, Bostian said the last thing he remembers is pushing the throttle forward to pick up speed and then braking when he felt the train going too fast into a sharp curve.

When he realized the train was about to derail, Bostian said he was holding tightly to the controls and thinking, "Well, this is it, I'm going over." Sources say the NTSB found that Bostian may have thought he'd already passed the curve when he sped up.
EMBED More News Videos

The train's data recorder shows that at about 55 seconds - a mile and a half before the Frankford Junction curve, one of the sharpest in Amtrak's Northeast Corridor, Bostian applied full throttle and held it there for about 30 seconds. The train reached a speed of about 95 mph.

He then slightly lowered the throttle for two seconds before returning to full throttle and holding it there for another 20 seconds. Three seconds before the train derailed, at a speed of 106 mph, Bostian applied the emergency brake.

That reduced the speed to 102 mph, but by then it was too late. Four of the train's seven cars and its locomotive derailed in a tangled heap.