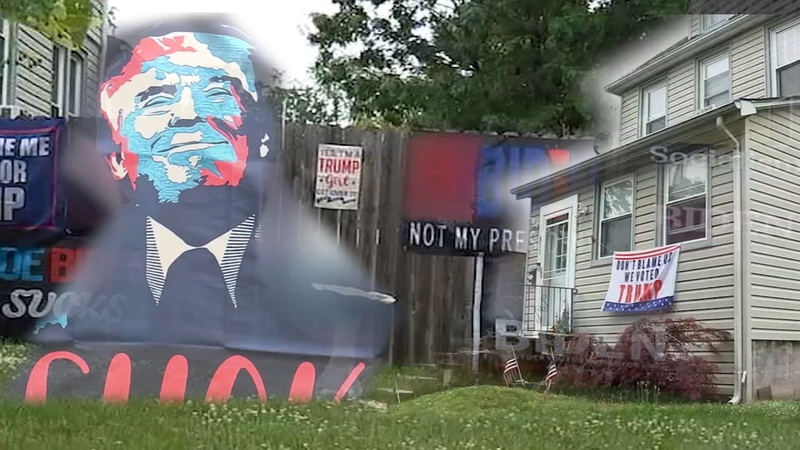 ROSELLE PARK, New Jersey (WABC) -- Politics and the results of the 2020 presidential election remain a contentious issue across American, and in one town in New Jersey, the tension is brimming over in the form of signs many residents find offensive.

The scene on Andrea Dick's front lawn in Roselle Park has become either a neighborhood attraction or an eyesore, depending on your political beliefs.

The issue is not her strong support for Donald Trump, rather it is her signs in her yard -- full of profane language and one showing the former president giving the two-finger salute.

"I'm done, and those flags are not coming done," Dick said.

Toni Yates reports on the Palestinian community center in New Jersey that was bombarded with threats.

Dick is obviously upset about last year's election results, but now, she is getting heat from the city because of the language on the signs.

"They want me to take the flags down by Monday which is not happening, I'm not doing it, I have a right to have those flags there, freedom of speech," Dick said.

She says she and her family have lived in the area a long time, and they are settled into their opinions. But some say the family has always expressed their views.

"My kid started school in 2013, I dropped him off in first grade, drove down this block, Confederate flags were in front of this house and it just...we're in New Jersey, it was just jarring," neighbor Meremu Chikwendu said.

The house on Willow Avenue has now become a tourist attraction with some people stopping by to show their support and others in absolute shock.

"This is terrible, I mean kids go by here, it's a family neighborhood, and why," one neighbor said.

The city wants the offensive signs removed so that children attending the school near the Dicks' house won't see the foul language.

"At this stage we have issued a warning, the summons is going out today, if there is no compliance there, then there will be a court appearance and a subsequent fine," Roselle Mayor Joseph Signorello III said.

The fine for keeping the signs up could cost $500 per day.