Cuomo says 'I did not do what is alleged, period' as Schumer, Gillibrand, other Dems call for resignation 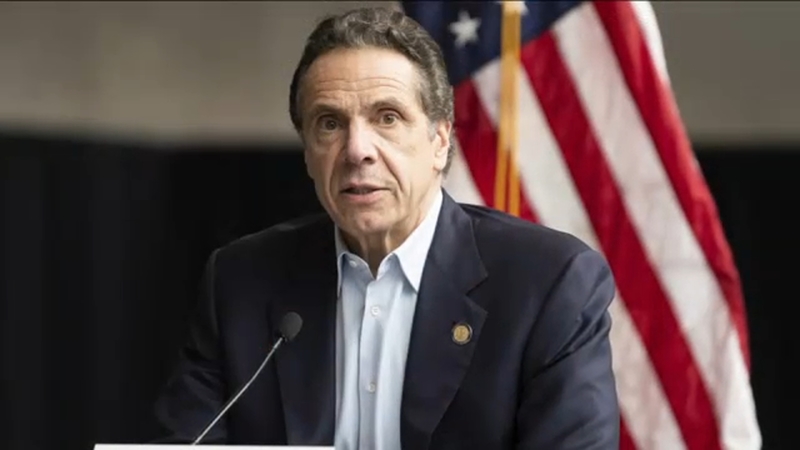 NEW YORK (WABC) -- Senate Majority Leader Chuck Schumer and U.S. Sen. Kirsten Gillibrand called Friday on New York Gov. Andrew Cuomo to resign, adding the most powerful Democratic voices yet to calls for the governor to leave office in the wake of allegations of sexual harassment and groping.

"Confronting and overcoming the COVID crisis requires sure and steady leadership. We commend the brave actions of the individuals who have come forward with serious allegations of abuse and misconduct," New York's two U.S. senators said in a joint statement. "Due to the multiple, credible sexual harassment and misconduct allegations, it is clear that Governor Cuomo has lost the confidence of his governing partners and the people of New York. Governor Cuomo should resign."

Both had earlier said an independent investigation into the allegations against Cuomo was essential.

A majority of state lawmakers had already called on Cuomo to resign, and more than half of New York's Democratic congressional members joined those calls Friday.

Governor Andrew Cuomo spoke out against those calls on Friday in a teleconference, denying that he sexually harassed any of the women who made allegations against him.

"I did not do what is alleged, period," Cuomo said.

He suggested that "politics" is at play in the allegations.
EMBED More News Videos

Governor Andrew Cuomo spoke out again on Friday denying that he sexually harassed any of the women who made allegations against him.

"I can tell you as a former attorney general who has gone through this situation many times there are often many motivations when making an allegations," he said.

"There are now two reviews underway," Cuomo said. "No one wants them to happen more quickly and more thoroughly than I do."

He said after Friday he did not plan to debate the topic in the press.

"People know the difference between playing politics, bowing to cancel culture, and the truth," Cuomo said. "I am not going to resign."

"Part of this is, is because I am not part of the club, and I am proud of it," the governor added.

He came out with his statement after several prominent members of New York's congressional delegation are joined in the calls for him to resign.
EMBED More News Videos

Several prominent members of New York's congressional delegation are joining calls for Governor Andrew Cuomo to resign, with the embattled Democrat caught up in a pair of controver

"After two accounts of sexual assault, four accounts of harassment, the Attorney General's investigation finding the Governor's admin hid nursing home data from the legislature & public, we agree with the 55+ members of the New York State legislature that the Governor must resign," Ocasio-Cortez posted on Twitter.

After two accounts of sexual assault, four accounts of harassment, the Attorney General’s investigation finding the Governor’s admin hid nursing home data from the legislature & public, we agree with the 55+ members of the New York State legislature that the Governor must resign. pic.twitter.com/jV5dwtuVPr

"The repeated accusations against the governor, and the manner in which he has responded to them, have made it impossible for him to continue to govern at this point," Nadler said.

"The recent allegations of sexual harassment and misconduct against the Governor are beyond troubling and describe a disturbing pattern of behavior that also now includes a potentially criminal act," they wrote. The gravity of these claims makes it clear to us that the Governor cannot lead the state while faithfully responding to multiple investigations. This is especially true in light of the impending state budget deadline, the need to continue guiding the state through the pandemic, and the fragility of the state's economic recovery. The New York State Constitution demands that if the Governor is 'unable to discharge the powers and duties of the office of Governor, the Lieutenant-Governor shall act as the Governor until the inability shall cease.' We call on the Governor to step aside at least until such time that the Attorney General's investigation is complete. We are confident that the Lieutenant Governor will ably serve the people of New York."

And after saying for several days he believed Cuomo "can no longer serve," New York City Mayor Bill de Blasio used the word "resign" for the first time Friday.

"The governor must resign," he said. "He can no longer do the job."

The calls for Cuomo's resignation grow louder every day, and 121 members of the state Assembly and Senate have said publicly they believe Cuomo can no longer govern and should quit office now, according to a tally by The Associated Press. The count includes 65 Democrats and 56 Republicans.

Cuomo's support in the state Senate was especially thin. Roughly two thirds of its members have called for the Democrat's resignation, including Majority Leader Andrea Stewart-Cousins.

The top Democrat in the state Assembly, Speaker Carl Heastie, released a statement Thursday authorizing a committee to begin an impeachment investigation.

"After meeting with the Assembly Majority Conference today, I am authorizing the Assembly Judiciary Committee to begin an impeachment investigation, led by Chair Charles D. Lavine, to examine allegations of misconduct against Governor Cuomo," he said. "The reports of accusations concerning the governor are serious. The committee will have the authority to interview witnesses, subpoena documents and evaluate evidence, as is allowed by the New York State Constitution. I have the utmost faith that Assemblymember Lavine and the members of the committee will conduct an expeditious, full and thorough investigation. This inquiry will not interfere with the independent investigation being conducted by Attorney General James."

It comes as a new report suggests members of the Cuomo administration called former employees to get more information about one of his accusers.

The purpose was to find out if they had heard from Boylan or to glean information about her in conversations that some said they saw as attempts to intimidate them.

The Journal reports the calls were made by current administration officials and former aides who are still close to the governor's office, according to several recipients.

Rich Azzopardi, a senior adviser to Cuomo, in a statement to the paper, confirms calls were made, but denied any intimidation.

RELATED | Gov. Cuomo responds to reports of a 6th accuser

In the most recent allegation, a former aide to Cuomo claimed he groped her in the governor's residence.

The Times Union of Albany reported that the woman, who it did not name, was alone with Cuomo late last year when he closed the door, reached under her shirt and fondled her. The newspaper's reporting is based on an unidentified source with direct knowledge of the woman's accusation. The governor had summoned her to the Executive Mansion in Albany, saying he needed help with his cellphone, the newspaper reported.

"I have never done anything like this," Cuomo said. "The details of this report are gut-wrenching."

He declined to comment further, saying he would not speak to the specifics of this or any other allegation given an ongoing investigation overseen by the state Attorney General Letitia James -- who has set up a web site seeking information relating to the case.

Anyone with information can visit AGIndependentInvestigation.com/, call 212-225-3100 for voice messages, text to 518-545-0870, or email independent.investigations@ag.ny.gov.

At least five accusers - Charlotte Bennett, Lindsey Boylan, Anna Liss, Karen Hinton and the latest accuser - worked for the governor in Albany or during his time in President Bill Clinton's Cabinet. Another, Anna Ruch, told The New York Times that she met Cuomo at a friend's wedding.