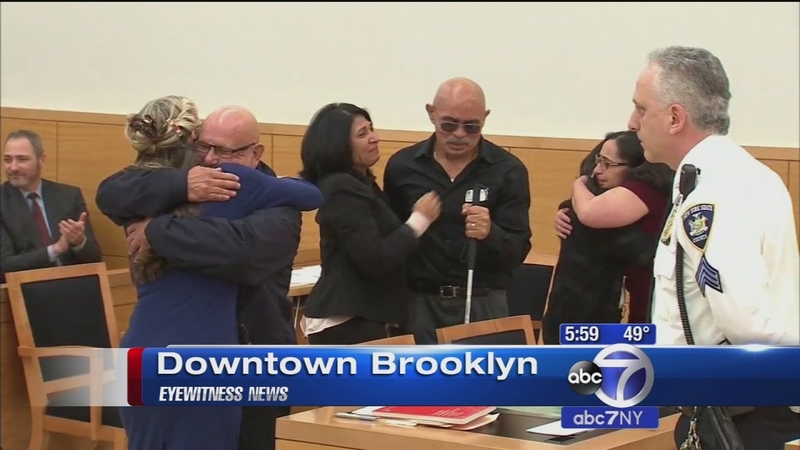 DOWNTOWN BROOKLYN -- A judge on Wednesday overturned the arson and murder convictions of three men accused of setting a 1980 fire that killed a mother and five children, an exoneration based partly on advances in arson science.

Two of the men spent more than 30 years in prison and the third died behind bars.

"I'll be able to go to my tomb and rest in peace because my name has finally been cleared and justice has been done," William Vasquez said after his named was cleared at a hearing in Brooklyn state Supreme Court.

Vasquez, Amaury Villalobos and Raymond Mora were arrested after a fire tore through a Brooklyn town house on Feb. 7, 1980, killing 27-year-old tenant Elizabeth Kinsey and her five children.

The men maintained their innocence but were convicted based on testimony from the building's owner, Hannah Quick, and from the fire marshal, who presented evidence of arson.

But Thompson said Quick, the only witness who tied the three men to the fire, was "a habitual liar" who confessed to family members before her 2014 death that she had sent three innocent men to prison.

Additionally, prosecutors said, a new understanding of fire science casts doubt on the claim that the 1980 blaze was intentionally set.

"We were made aware of an evolution, perhaps even a revolution, in the study of fire science," Mark Hale, the chief of the conviction review unit at the Brooklyn district attorney's office, told Judge Matthew D'Emic. Hale said the fire was "in all likelihood accidental."

Hale's unit reviewed the case after prodding from Adele Bernhard, the director of the Post-Conviction Innocence Clinic at the New York Law School, who had been contacted by Villalobos.

Bernhard had asked Florida-based fire expert John Lentini to look at trial testimony, police reports, building plans and other materials and prepare a report on the 1980 fire. He concluded that there was no good evidence that the fire had been set.

At the trial, an investigator testified that the fire had started in two places, suggesting arson, and he pointed to signs, such as burned baseboards, that an accelerant had been used.

But Lentini said in his report that "the science of fire dynamics was poorly understood in 1980, and much of what was believed by well-meaning investigators was, unfortunately, false."

The case is one of dozens around the country that have come under scrutiny because of now-outdated scientific notions about how a deliberately set fire can be distinguished from an accidental one.

"There's a lot of bogus stuff out there, particularly from the '80s and early '90s," Lentini said in a phone interview.

The men's exonerations also are part of a push by Thompson to review questionable convictions from the 24-year tenure of his predecessor, Charles Hynes.

Vasquez and Villalobos were paroled in 2012. They spent the most time in prison of any defendant whose conviction has been vacated so far as part of Thompson's effort, the prosecutor said.

Mora died of a heart attack in prison in 1989, Thompson said.

Vasquez and Villalobos said they are not angry about the years they lost.

"Why should I be angry?" Villalobos said, "I know they did something bad to me, but God is there and I know that God is on my side."

Vasquez said he is not bitter even at Quick, whose testimony sent him to prison.

"All my suffering would be gone in vain if I hold any bitterness," said Vasquez, who is now blind because of glaucoma that Bernhard said went untreated in prison. "We all make mistakes. She made a mistake and too bad that I had to pay with it."