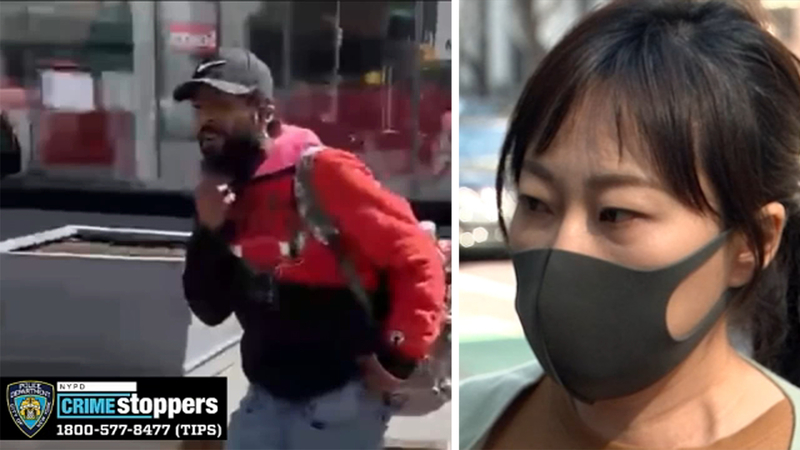 MANHATTAN (WABC) -- A man has been arrested and charged with a hate crime after attacking an Asian American mother attending a rally against anti-Asian violence in New York City, according to police.

They say he's been charged with a hate crime assault and criminal mischief as a hate crime.

The Asian American mother who was attacked spoke out about the incident that her daughter had to witness.

The 37-year-old woman was on her way to an Asian American rally in Union Square on Sunday morning with her 7-year-old daughter at the time of the attack.

The mother didn't want to give her name but says she is still shaken up. She sprained her ankle, is on crutches, and still has bruises and lacerations on her face.

She says the suspect approached her and asked for her sign. She thought he was heading to the rally so she gave it to him and that's when she saw him tearing it up and stuffing it a trash can.


When she asked him to stop, he hit her twice in the face, so she chased him.

"He was destroying the sign and trying to put it in the trash can, so I walked forward and towards him saying, 'What are you doing?' And he just came in front of me and punched me in the face, and then I think I stopped for a little bit, and then I chased him. And there were some people around as well, and I just wanted to get him and call the police," the victim said.

Several good Samaritans ran after him into the Astor Place subway stations and were able to take photos of the attacker.

"When you see something like that happening, it is your job to make sure they are seen and being heard," DeVonn Francis said.

They said the suspect appeared to be emotionally disturbed before getting away on a train.

"He also flashed people on the train platform. He dropped his underwear and showed his genitalia to everyone on the platform," Francis said.

According to the NYPD there have been 23 anti-Asian hate crimes so far this year, compared to 29 during all of 2020.

Mayor Bill de Blasio urged the community to support the Asian community, speak up for them and help report anything you see.

"Just the last few days there were two women attacked, an elderly man attacked simply because of who they are," de Blasio said. "This is just something that sickens me and it angers me and we will deal with it aggressively."

Over the weekend, a 66-year-old man was punched in Chinatown and a 54-year-old woman was struck in the face with a metal pipe by a man yelling slurs who was later apprehended.