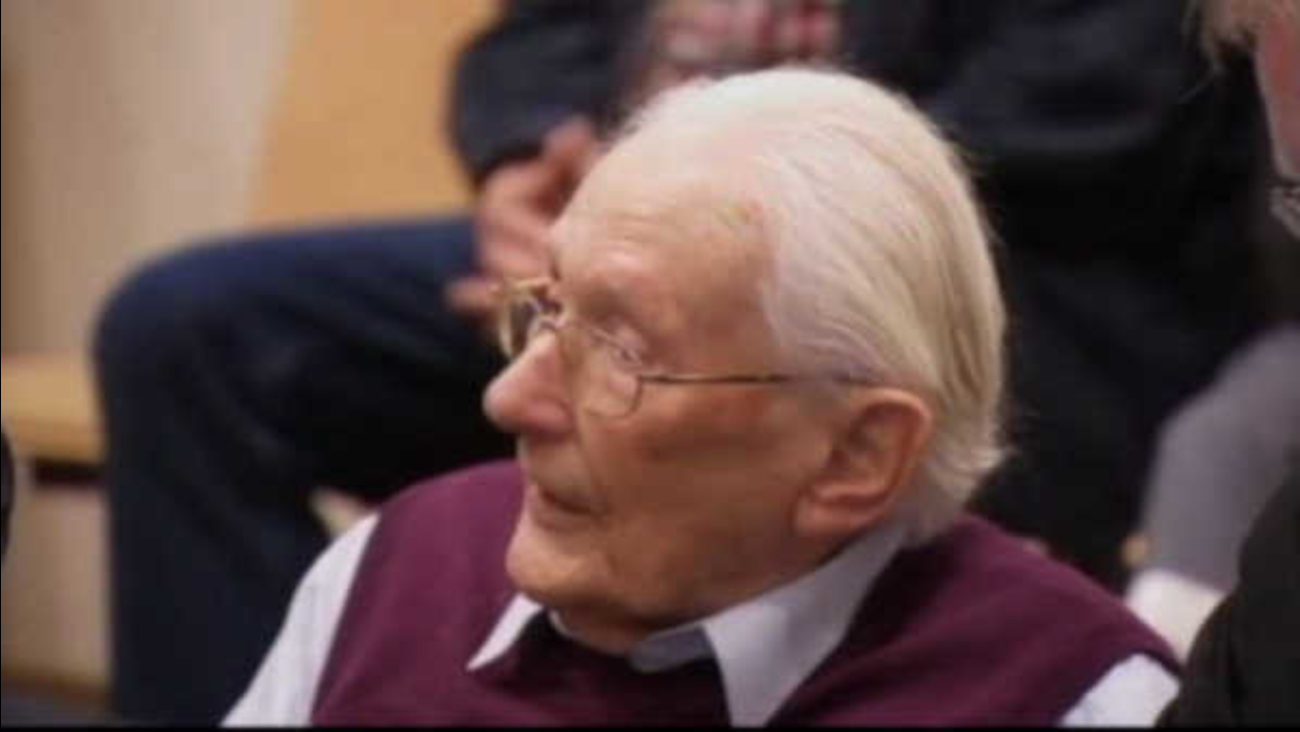 LUENEBURG, Germany -- A 94-year-old former SS sergeant who served at the Auschwitz death camp was convicted Wednesday on 300,000 counts of accessory to murder and sentenced to four years in prison.

Oskar Groening testified during his trial at the state court in Lueneburg, in northern Germany, that he guarded prisoners' baggage after they arrived at Auschwitz and collected money stolen from them. Prosecutors said that amounted to helping the death camp function.

Presiding Judge Franz Kompisch said Groening had decided to be part of the Nazis' machinery of death.

Groening sat expressionless as the verdict was read and listened attentively for more than an hour and a half as the judge detailed the ruling, occasionally sipping from a bottle of water. He then walked out of the courtroom without talking to reporters.

The charges against Groening related to a period between May and July 1944 when hundreds of thousands of Jews from Hungary were brought to the Auschwitz-Birkenau complex in Nazi-occupied Poland. Most were immediately gassed to death.

Unusually for trials of former Nazi camp guards, Groening has been open about his past throughout the proceedings.

Groening said when his trial opened in April that he bears a share of the moral guilt for atrocities at the camp but that it was up to judges to determine whether he is guilty under criminal law.

In their verdict, judges went beyond the 3 -year sentence prosecutors had sought. Groening's defense team had called for him to be acquitted, arguing that as far as the law is concerned he did not facilitate mass murder.

Kompisch said Groening deserved respect for having been open about what he did and having testified, but that given the enormity of the crime it would have been inappropriate to impose a lower sentence.

Both sides have a week to appeal, and both prosecutors and the defense said they would consider whether to do so. Defense lawyer Hans Holtermann said Groening remains free in the meantime, and given his age and the possible length of appeal proceedings it was uncertain whether he would actually go to prison.

Dozens of Auschwitz survivors and their relatives joined the trial as co-plaintiffs, as German law allows, though none were present for the verdict.

Lawyer Thomas Walther, who represents 51 co-plaintiffs, said that "it is an excellent verdict."

"For us, it not a big question of whether it is three, four, five, six years in prison - that was never a topic," he said. The survivors "are just happy that this trial has been carried through to the end and that there was a verdict."

The Simon Wiesenthal Center's top Nazi hunter welcomed the ruling, saying that he hoped it will pave the way for further prosecutions.

"It is abundantly clear that the window of opportunity to bring Holocaust perpetrators to justice will soon be closed, which makes the expedition of these cases of exceptional urgency," Efraim Zuroff said in a statement. He urged judicial officials "to give first priority to these cases."