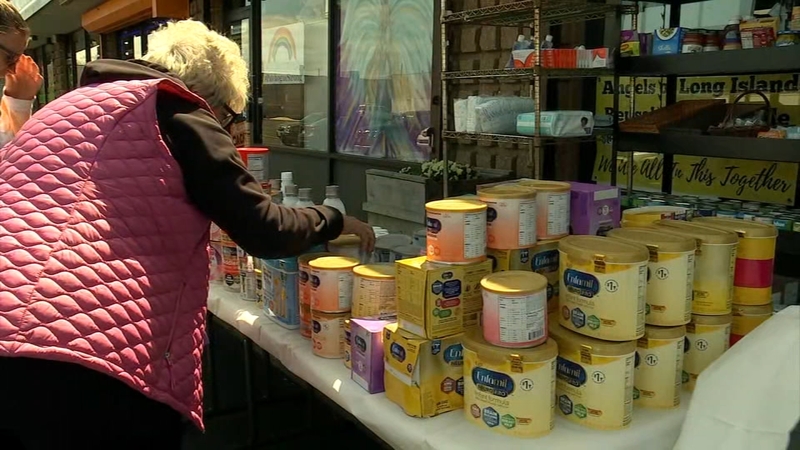 Baby formula given away on Long Island to help families struggling

"We were blessed with a lot of donations," said Debbie Loesch with Angels of Long Island in Patchogue. "And we're hoping they keep coming."

Louis and Gina Cheeseman, of Sound Beach, drove 30 minutes to get formula for their 10-month-old son Matteo. Matteo has a milk allergy and the couple has had a difficult time finding formula for him.

"We've been trying with our pharmacy for over 3 months and we get one can," Louis Cheeseman said.

"It's not like he can have any type of formula," Gina Cheeseman said.

"I ran right over as soon as I saw it," she said.
Marzano said she has her friends and family members on the lookout for formula every time they go to the grocery store.

"I have them all texting me," she said.

She said the FDA is working closely with the baby formula industry to maximize production capabilities including expanding hours of operations of manufacturers, prioritizing product lines that are of the greatest need, and expediting FDA reviews to get out more supplies.

Eyewitness News found special cans and bottles of baby formula, particularly for those children with milk allergies, being sold for more than $100 on eBay and Facebook Marketplace. Doctors say parents should be careful buying formula from these sites since they are not from authorized retailers.

They also advise parents not to water down formula or try to make their own formula.

Mariana Kortright, of Central Islip, came to Angels of Long Island Wednesday because she has only one can of formula left. She said she has her father who is a truck driver up and down the East Coast on the lookout for baby formula.

"If you see anything stop, grab it!" she said she tells him. Kristi Pappas, of South Setauket, donated formula Wednesday to Angels of Long Island.

She said she had it leftover from her baby. "I know what it's like with a baby - if they're not fed, it's not good," she said. "You know, mothers helping mothers."

Loesch said she will give away the formula as long as people keep donating it.

"As long as this shortage is going on, we're happy to have people use as a resource," she said.