The Dodgers won the game, but a ballgirl made the save of the night.
WABC 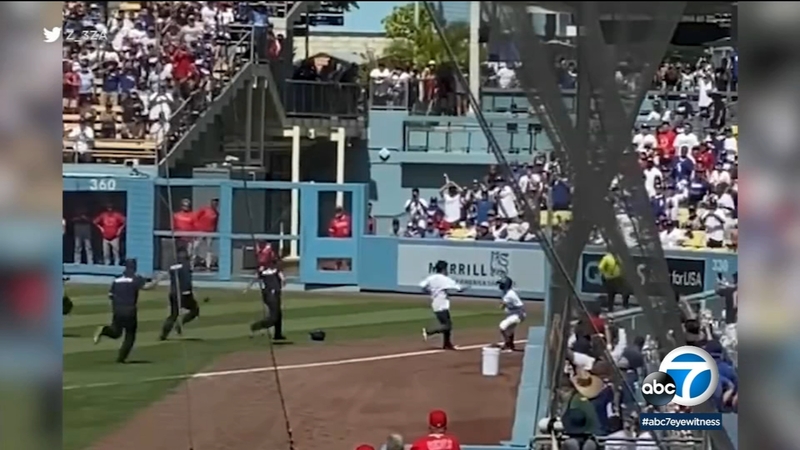 LOS ANGELES -- Yes, the Dodgers and Angels were playing, but it was a ballgirl who stole the show in Los Angeles on Sunday.

A fan ran onto the field at Dodger Stadium during the game and managed to evade a half-dozen Dodgers security personnel, sprinting and weaving half the length of the field, and even hurdling over one guard.

Cellphone videos showed as he approached the stands, a ballgirl stepped up into his path.

She grabbed the running man by the side, throwing him off-balance enough that his momentum sent him tumbling head first over the wall.

The Dodgers defeated their LA rivals 8-2, but that play may have been the highlight of the game.
Report a correction or typo
Related topics:
sportscaliforniau.s. & worldlos angeles dodgers
Copyright © 2022 WABC-TV. All Rights Reserved.
TOP STORIES
3 men killed in violent night across NYC
UK Prime Minister Boris Johnson expected to resign
7 On Your Side hunts for driver after ice cream truck hit and run
Mayor Adams holds 1st community conversation on public safety in NYC
Man slashed, nearly killed after inadvertent bump in subway station
Woman pinned under bus, rescued after being struck in crosswalk
Woman shot in chest while walking down street in Queens
Show More
406 NYC arrests among 1,500 in U.S. crackdown on outstanding warrants
Beloved New Jersey deli to close after 120 years in business
Dog rescued from water after swimming 1.5 miles off NJ coast
AccuWeather: Not as warm
Restaurant demolition to pave way for NY revitalization project
More TOP STORIES News