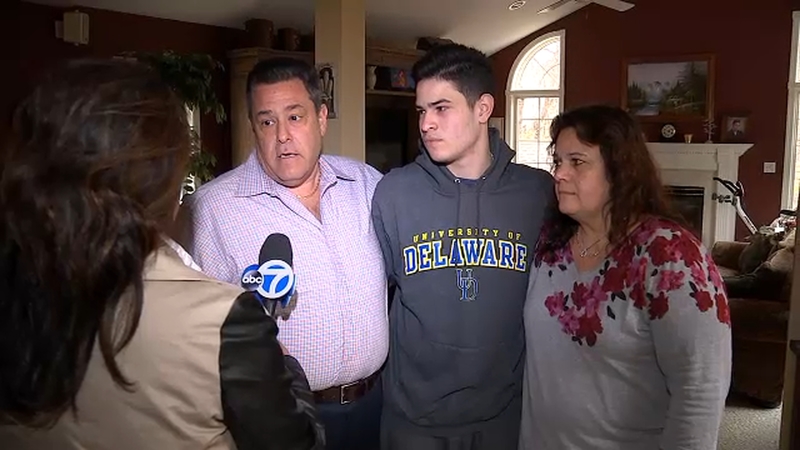 SUFFERN, New York (WABC) -- Thieves didn't need guns nor hold-up notes to exploit a larcenous loophole and make off with $10,000 at one of the biggest banks in the country.

One of their customers was stuck with the five-figure fraud bill, and he turned to 7 On Your Side.

He had $74 in his bank account -- money earned delivering pizzas -- but one night his balance ballooned from a big cash deposit made in California. So Hirschberg's dad called the bank.

"They said we'll put it into investigation and a freeze on the account," dad Michael Hirschberg said. "I said fine. I wanted to know what's going on."

Apparently, Jason's chip card was cloned and his pin compromised. Criminals used both to make a $1,000 cash ATM deposit at the Chase Branch on Hollywood Boulevard in Los Angeles.

The thieves deposited the cash, bringing Jason Hirschberg's balance over $1,000. That enabled the swindlers to quickly go to a bunch of different Chase branches in the area and cash a counterfeit check in each branch.

Since most of the checks were made out for $995, all were cashed by the tellers because the balance in the account was higher than the check amount.

"I think Chase should've stopped," Michael Hirschberg said. "There was no money in it. What are they doing cashing these checks?"

By the time the bandits were done, they had bamboozled more than $10,000. But the bank denied the family's fraud claim and went after them for the money.

"Within two to three days, anything that had my name on it was cleared out by Chase," Michael Hirschberg said.

That meant his joint account with his daughter, who's in college, his retired mother in Florida, and the account he had with his wife were all emptied.

Michael Hirschberg wrote to both the COO and the CEO at Chase, but he still got denied.

7 On Your Side asked Chase to take another look at the fraud claim and heard from them within a week.

"I was so surprised," Michael Hirschberg said. "Everything they took, we got back."

After all of 7 On Your Side's calls and emails, Chase said it took another look at the customer's account again and credited the balance.

As a result of the scam, Chase told us they've changed their check cashing policies to prevent this kind of fraud.

Chase warns customers to scan their statements regularly and report fraud as soon as they see it.

Email 7OnYourSideNina@abc.com, or contact Nina on her Facebook page or tweet her at Twitter @7OnYourSideNY! You can also call the 7 On Your Side Hotline at 917-260-7697 or fill out the form below.
Report a correction or typo
Related topics:
personal financerockland countysuffernchecking accountsscam7 on your sidefraudbanksatm
Copyright © 2022 WABC-TV. All Rights Reserved.
TOP STORIES
Suspect charged in murder of Upper East Side mom
Man steals $26,000 worth of product from East Village store
Woman wins $400k suit against NYPD for 'violent abuse' during protest
NY overhauls handgun rules in effort to preserve some limits
AccuWeather Alert: Scattered severe storms
Tropical Storm Colin forms off Carolinas
Where to watch 2022 Fourth of July fireworks
Show More
Macy's 4th of July Fireworks 2022: Everything to know
Shark patrols after man bitten; Tri-State beaches gear up for July 4
Nathan's Hot Dog Eating Contest competitors weigh in on Coney Island
ESSENCE Festival descends on New Orleans to celebrate Black culture
Long Island man receives kidney from neighbor
More TOP STORIES News