Exclusive video: Search on for suspects after man beaten outside bar on Long Island 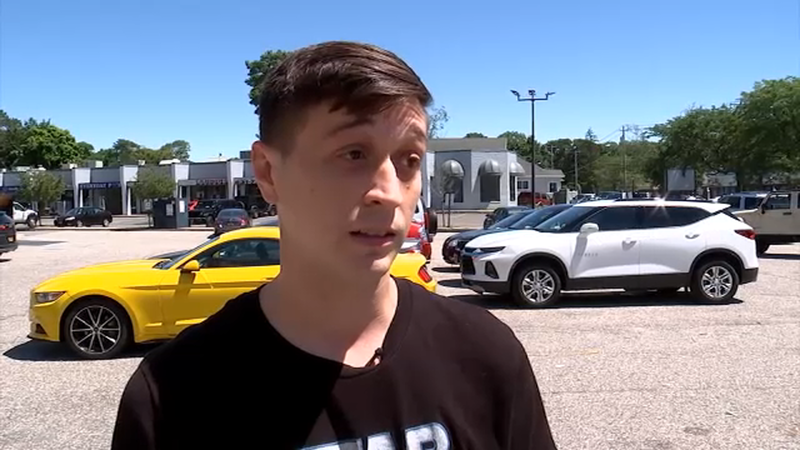 HOLBROOK, Long Island (WABC) -- Eyewitness News has obtained exclusive video of a brutal assault of a 26-year-old outside a bar on Long Island. Police are looking for the men involved.

Ryan DeGennaro said at least two men beat him unconscious outside Irish Times Pub in Holbrook on June 12. DeGennaro spent a week in the hospital with a brain bleed.

DeGennaro, of Holbrook, said when he arrived at the pub on Main Street there was a line to get in and men were being violent in the parking lot.

"People were fighting outside," he said in an interview with Eyewitness News reporter Kristin Thorne. "There were people with their shirts off."

DeGennaro said he began recording the men on his cellphone. He recorded one man violently stomping on a metal barrier.

He said the bouncer told the men to leave the parking lot.

"They thought it was me," DeGennaro said. "I shouted back at them, 'It wasn't me. It was the bouncer inside.'"

DeGennaro's cellphone shows the man who had been stomping on the metal barrier come toward DeGennaro. The men can be heard yelling at DeGennaro that they're going to beat him up.

He said one man punched him in the head forcing his head to hit a concrete wall. He fell to the ground and the men started kicking him in the head.
"The first kick that made contact with my head I pretty much immediately passed out," DeGennaro said. "I don't remember anything."

DeGennaro's phone recorded the entire incident. At one point, his sister can be heard calling 911.

DeGennaro was rushed to Stony Brook University Hospital where he spent several days in the ICU suffering from a brain bleed. He also has several broken bones in his face and a broken ear drum.

Suffolk Police said they're investigating the incident, but have not made any arrests.

DeGennaro's video shows the men with several young women. He is asking them to come forward to police.

"I think they're going to think deep in their heart whether or not it was right for them not to say anything and if it's right for them to let their friends get away with almost killing someone," DeGennaro said.