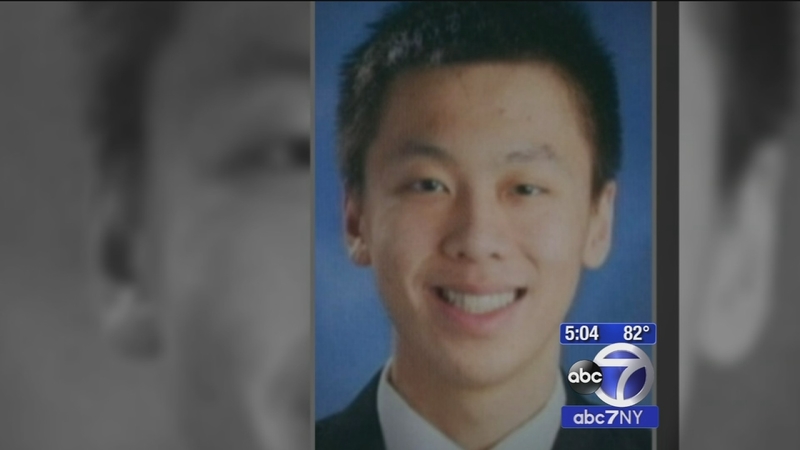 NEW YORK (WABC) -- Two years later, justice is finally moving ahead for a young Baruch College student who prosecutors now believe was killed by those he wanted to befriend.

More details were released Tuesday, after 37 students were charged in the tragic death of 19-year-old Michael Deng, a freshman at Baruch College. Five of the students have been charged with homicide in the case, while dozens of others were previously charged with assault, hazing and criminal conspiracy.

In all more than three dozen members or alumni of Pi Delta Psi and the fraternity itself are expected to face charges after Deng was blindfolded, weighted down and forced to run while being tackled outside a rented home in the Poconos in December 2013.

Police said that in December 2013, members of the Pi Delta Psi fraternity from Baruch and St. John's assaulted Deng during a hazing ritual while he was blindfolded and wearing a backpack filled with 20 pounds of sand. As part of a ritual known as the "glass ceiling," participants run across a frozen lawn and try not to be tackled by a line of brothers.

Court records quoted statements from eyewitnesses, including so-called fraternity "pledge educator" Sheldon Wong. "I usually can say, I say stop and everything stops and then just tell them you know to fix - to fix themselves or anything that gets out of hand, but then I guess that one split second things got out of hand and I couldn't do anything about it."

Wong described Deng after he "fell" as snoring and they brought him inside and wrapped him in a blanket by the fireplace. He described Deng as tensed up while on the couch, and was dead weight carrying him to the car. Wong also stated Deng was making "groggy" noises on the way to the hospital.

Chief Chris Wagner, Pocono Mountain Regional Police, said, "He was singled out and he was treated harsher than the other pledges ... It takes 100s of pounds of impulsive loads or 100s of pounds of G-Force in order to cause the damage to the interior of his brain."

At one point he was shoved and fell over, hitting his head, police said. After Deng lost consciousness, other fraternity members brought him into the house, but they never called 911 for help, police said. Instead they put him near the fire, changed his clothes and searched the Internet for information about his symptoms, police added.

"I can say it involved physical contact, which became very aggressive," former Pocono Mountain Regional police chief Harry Lewis said at the time. "It also involved some pushing and shoving and hitting."

After two hours, Deng was finally taken by three of the fraternity members to a local hospital, where he died two days later. Investigators reportedly said several frat members tried to hide their cellphones from police officers to keep authorities from seeing videos, photos and conversations about the hazing rituals.

Police also said about 20 of the 30 fraternity brothers in the house had left between the time Deng was injured and before police arrived to interview the remaining members.

Michael Rakaczewski, assistant district attorney Monroe County, said, "This is a clear case of why hazing is not permitted."

The college issued a statement Tuesday. "Baruch College has taken strong action to ensure the safety and well-being of all students who participate in student organizations on campus," it said. "Baruch immediately instituted a permanent ban of the Pi Delta Psi fraternity. Starting in the fall of 2014, Baruch also instituted a suspension of all pledging activities for campus Greek Life organizations."

The family said in a statement after the indictments:

"Today, the parents of Michael Deng applaud the actions by the police, grand jury and Monroe County District Attorneys to bring criminal charges against the Pi Delta Psi Fraternity and its members for the tragic, entirely preventable hazing death of Michael. Too many families have been devastated as a result of fraternity hazing, with at least one student dying every year from hazing since 1970. Fraternities and their members must be held accountable, and this step by authorities is an important one. Michael was a wonderful, beloved young man, and, in his honor, the family will also continue pursuing its wrongful death case against the fraternity to cause it and other fraternities to change so that other parents will be spared the loss of a precious child."

"This young man's death was a terrible tragedy and our deepest condolences and prayers continue to go out to his family and friends. I love my brother very much and as his sister I'll be here for him as he goes through the legal process."

"In the wake of Chun Hsien "Michael" Deng's tragic death at an unsanctioned fraternity event in the Pocono Mountains in December 2013, Baruch College has taken strong action to ensure the safety and well-being of all students who participate in student organizations on campus. Baruch immediately instituted a permanent ban of the Pi Delta Psi fraternity. Starting in the fall of 2014, Baruch also instituted a suspension of all pledging activities for campus Greek Life organizations.

Greek Life is a very small part of the undergraduate culture at Baruch, with less than 100 students participating in fraternities or sororities out of approximately 15,000 undergraduates enrolled at the College. Since the moratorium on pledging that began in the fall of 2014, student participation in Greek organizations has decreased even further, due to the fact that these groups are not able to recruit new pledges/members.

While we cannot comment on the disciplinary status of any individual student due to privacy requirements under Federal law, Baruch conducted its own internal judicial review of students involved in this incident and brought disciplinary proceedings against all of them, except for those who voluntarily withdrew from Baruch College.

We owe it to Michael and his family to hold accountable those who were responsible for the senseless death of this promising young man."