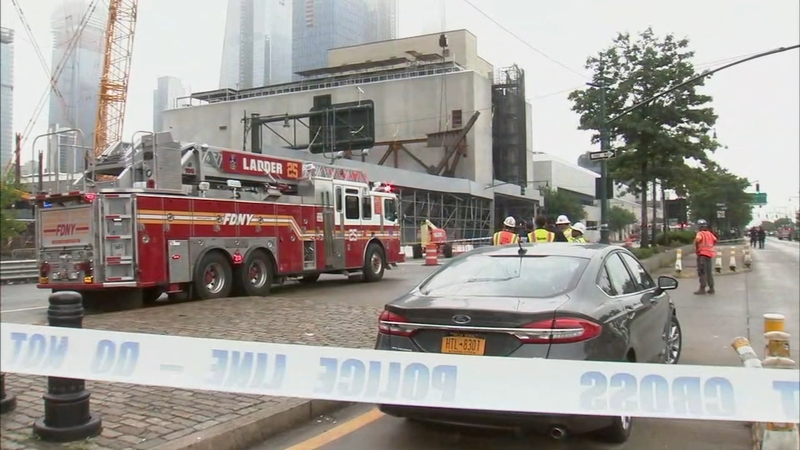 NEW YORK (WABC) -- The West Side Highway reopened Tuesday night after a crane lifting a beam struck part of an under-construction building at the Javits Center, officials said.

Initially, the Department of Buildings had said the crane dropped beams while lifting. But the department later clarified that the preliminary investigation revealed a beam struck the building.

The large beam was attached to the hooks of the crane. It was being lifted when it caused a second smaller beam to topple over, striking the sidewalk shed.

That second beam ended up resting on the damaged shed, over the West Side Highway. That's what the Fire Department was afraid may collapse.

The DOB worked on a plan to remove the beam safely and a large crane was brought in to secure it.

No injuries were reported.
The West Side Highway had been closed between West 34th Street and West 42nd Street since the accident, which caused major traffic backups on the highway and streets in the area.

The Port Authority says the vent building for the Lincoln Tunnel was evacuated as a precaution, but there is no impact from this incident on Lincoln Tunnel operations. Only staff is in that building, not the general public.

NY Waterway said they evacuated the Midtown/W. 39th St. ferry terminal, and no ferries or buses may enter/exit the terminal.
Drivers are urged to avoid the area.

#FDNY members are on scene at 655 W 34 St. Manhattan for beams at a construction site leaning precariously on a sidewalk shed. There are currently no injuries reported. West St. is closed in both directions in the vicinity of the incident pic.twitter.com/pGxSYIsVbF