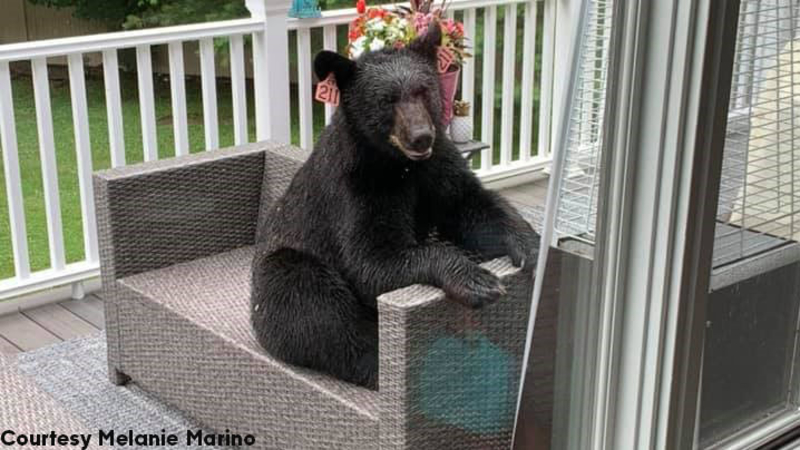 Famed 'Bear 211' makes itself at home on New York deck

And it turns out the bear has quite a following.

The animal, knows as Bear 211 after the marked tags on his ears, showed up on the Marino family porch in Armonk last week, siting on a chair and walking up right to their door.

"The bear was here, the cushions weren't on," Melanie Marino said. "He was just sitting here for a little bit."

The bear was spotted outside several homes and even reportedly put its paw on a man who was outside gardening.

She was preparing dinner in the kitchen Thursday evening when her 4-year-old daughter and 2-year-old son asked to go outside.

She followed them out the door and quickly realized they were not alone.

"So I started screaming, 'Bear, bear, bear!'" she said. "Brook started running toward me, no question. My son was a little confused. So I ran over to get him and I took him by the arm, and the bear actually followed us up to the deck."

That's when she recorded video of the bear, which at one point got on its hind legs and leaned against the sliding glass door.
EMBED More News Videos

A Westchester County family got the surprise of a lifetime after a black bear made itself right at home on their back porch.

The Marinos are from the Bronx, and they relocated to Armonk just a few years ago.

"You kind of think the mom might be around, but thank God it was just a baby bear," Anthony Marino said. "It was just fun to watch."

According to the New York Department of Environmental Conservation, the 2-year-old male bear suffered massive blunt impact trauma, likely from a being hit by a vehicle.

It turns out the bear is quite the traveler.

Two weeks ago, police in Westport, Connecticut, issued an advisory after people spotted the same bear in multiple locations.

Bear 211 even has its own Facebook page, where people document its movement throughout Westchester and Fairfield counties.

Police in North Castle issued a similar warning amid an uptick in bear sightings.

"We have once again received reports of black bear sightings today in the Windmill Farms area," the department said in a post. "Please do not become overly comfortable or complacent when coming into contact with wildlife. Please do not feed bears either deliberately or inadvertently. Please remove food sources that the bear may have access to. If you are uncertain or uncomfortable when a bear is observed or encountered, call the North Castle Police immediately at either (914) 273-9500 or use 911."