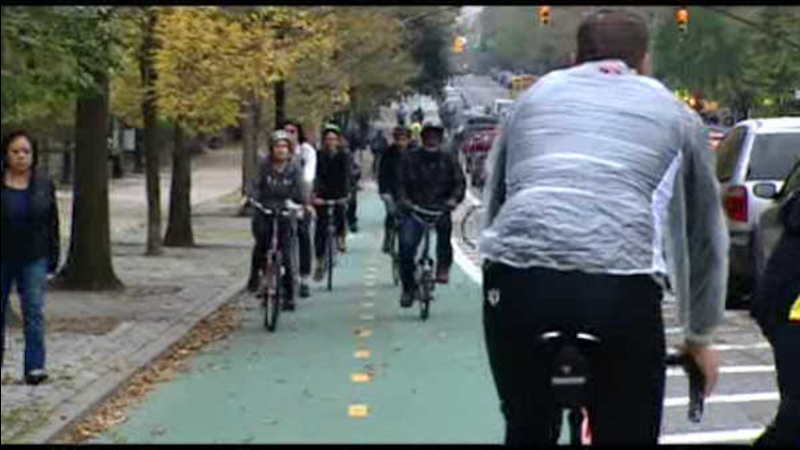 NEW YORK (WABC) -- The NYPD will work this week to make bicyclists safer by focusing on dangerous violations in bike lanes, with a crackdown in all 77 precincts on drivers who do not play by the rules.

The "Bicycle Safe Passage" is part of the ongoing Vision Zero effort, and it's about keeping the bike lanes open and safe for all concerned.

If the bicycle is your lifestyle and preferred mode of transportation, then this is the week to notice safety measures.

"We are going to be targeting individuals who are committing moving violations, hazardous violations and hazardous parking blocking bike lanes in the next week or so," NYPD Transit Chief Thomas Chan said.

The focus on bicycle safety comes as the weather turns warmer and more people take to bikes for both basic transportation and pleasure. It is estimated that New Yorkers make more than 400,000 cycling trips each day, more than triple 15 years ago.

"This targeted initiative will make sure New Yorkers on bikes have clear bike lanes and safe conditions as more and more people take to the streets," he said.

Natalie Kathleen has been riding for year.

"I feel safe on a bike, but you have to really look and watch what's happening," she said. "I think pedestrians are worse than cars."

Still, that's not a popular idea with all riders.

"I don't like wearing a helmet because it's too much pressure," cyclist Stephen Miller said. "(Even if it's safer), I'm not going very fast."

"We are focusing on violations that can endanger our city's cyclists," he said. "And making sure New Yorkers can safely travel on bike lanes throughout the five boroughs."

Officials say 1,500 officers assigned to the transportation division will also be on patrol looking for trouble spots.

"If there was one specific location then I would assign people there, full-time, and address it and pretty much eradicated that problem," Chan said.

Agents will be going after drivers who are parked or double parked in bicycle lanes. Since 2010, NYC DOT has expanded and enhanced the on-street bike network by nearly 300 miles, including more than 40 protected lane miles, with a record 12 miles installed in 2015. NYC DOT is on track to install even more protected lanes in 2016, with over 15 new miles planned.