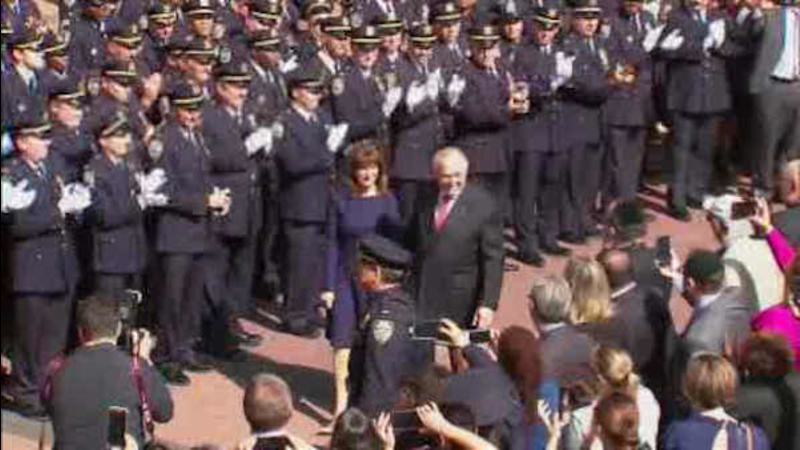 NEW YORK (WABC) -- William Bratton, the police commissioner who led departments in Boston, Los Angeles and New York and saw his crime fighting strategies copied across the nation, ended his unparalleled law enforcement career with a ceremonial send-off Friday in the city that was the setting of his biggest triumph.

The 68-year-old stepped down Friday after three years as New York's police commissioner.

Bratton was an early champion of the theory that you can deter serious crimes by cracking down on minor offenses.

A standing ovation for NYPD Police Commissioner Bratton as he exits his final CompStat pic.twitter.com/96rhaWomuz

He retired Friday afternoon with a ceremonial 'walkout' from One Police Plaza.

Commanders lined up in formation outside of NYPD headquarters to bid farewell to Bratton as he left the building for the last time as commissioner.

Just before, Chief of Department James O'Neill was privately sworn in as Police Commissioner.

Commissioner O'Neill then started off his new role with this social media post:

Let's do this together #NYC. All communities have to feel they're understood by #NYPD & know they're treated fairly. pic.twitter.com/4PGN7F8Vli

Bratton received a standing ovation in Lower Manhattan Thursday, following his final Comp-Stat meeting at police headquarters. Bratton told his officers that they are the best, and they are the finest.

The formal public ceremony for O'Neill will be next Monday at police headquarters.

Bratton is leaving to become a risk and security adviser at Teneo, a consulting firm.