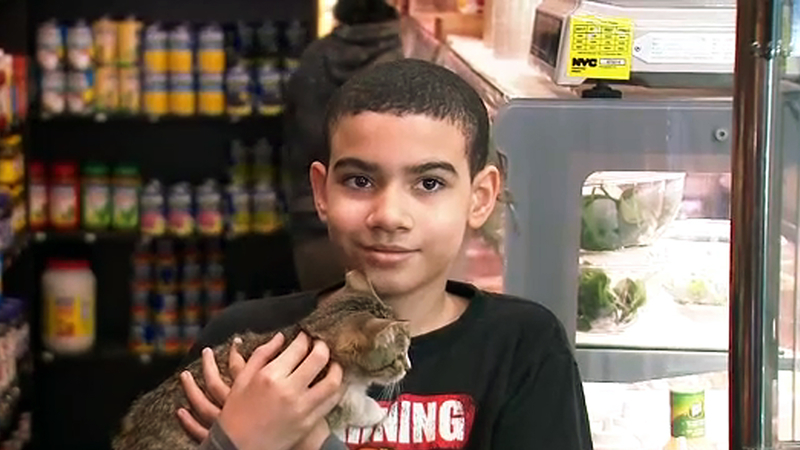 THE BRONX, New York (WABC) -- Reunited and it feels so good.

A beloved "bodega cat" that shares a special bond with a neighborhood boy and was stolen from a Bronx deli over the weekend has been returned.

Surveillance video showed a man in a purple hoodie walk into Ismael Gourmet Deli on 238th Street on Saturday and grab the cat. The man then slapped a dollar bill onto the counter and walked out of the store, cat in tow.

Around 40 minutes later, the bodega owners noticed the cat was gone and alerted police.

Surveillance video shows the sweet moment a stolen bodega cat was reunited with her family in the Bronx ❤️ https://t.co/hQ9Hqmfe39 pic.twitter.com/yNoKscsUY9

Bodega cats often become neighborhood staples, and in Luna's case, this is especially true. Jonathan, a 10-year-old boy with autism and the son of the bodega owners, has a special relationship with Luna.

"(Jonathan) hasn't stopped crying," owner Ismael Diaz said. "He can't comprehend. We tell him that the police are investigating, so every time he sees a police officer, he goes, 'Mom! Mom! Ask them, ask them if they found her.'"

He visits her every day after school, and the two are essentially inseparable.

"She's so cute and soft, and I want her back," Jonathan said.
EMBED More News Videos

Marcus Solis has the latest on the search for a cat stolen from a Bronx bodega.

The owners said only that Luna was returned Thursday morning, but they did not offer additional details.

Authorities say 29-year-old Stanley Duran is charged with petit larceny, and the NYPD 50th Precinct thanked the public for sending tips. Officers also stopped by with a "welcome home" gift for Luna.

The case of the Bronx bodega cat burglar has been solved! Our Neighborhood Coordination Officers from the @nypd50pct stopped by to visit Johnathan and drop off a “welcome home” gift for Luna. We’d say this was a purrfect ending to this story 😺. pic.twitter.com/iqWul6hbUm