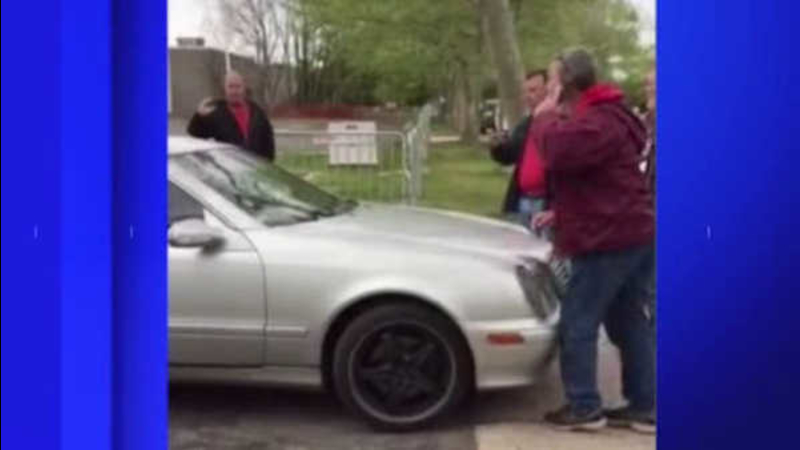 BOHEMIA, Long Island (WABC) -- Two people were struck by a car in a Long Island Verizon lot Thursday, and a company security guard was allegedly behind the wheel.

The two appear to have been hit intentionally Thursday morning outside a building on Knickerbocker Avenue in Bohemia.

Police said the driver of a Mercedes-Benz struck the workers.

VIDEO: Man arrested after hitting two Verizon picketers with his car. Hear from them and the driver on @ABC7NY pic.twitter.com/MmBqyOpLxO

The suspect is Curtis Duncan of West Babylon, a private security worker for Verizon, who was arrested down the street after workers called police.

Kevin Travers says he couldn't believe the car actually hit him. He went to the hospital. He just has a sore leg.

"I don't know what to think. It's crazy to think that someone would use a car like a weapon like that," said Travers.

It was about 7:15 a.m. when police say Duncan, driving a Mercedes Benz, made contact with at least one picketer outside a Verizon office in Bohemia.

We spoke with him as he left the police precinct Thursday afternoon. "My attorney will let 'em know, have a good day," he said.

He's being charged with one count of reckless endangerment. A spokesman for Verizon says picketers are being encouraged to physically block and obstruct vehicles.

He says in this case the workers were taunting Duncan. The spokesman said in a statement to Eyewitness News: "This is what happens when picketers admittedly taunt and harass our employees and others who are doing nothing more than trying to serve our customers."

Rich Young, a Verizon spokesman, said in a statement that the picketers were "clearly putting our employees and others in harm's way. We obtained a statewide injunction to stop such behavior. Despite this court order - picketers are still being encouraged to physically block and obstruct vehicles."

Verizon and union officials representing about 39,000 striking landline and cable workers on the East Coast agreed to restart negotiations this week.

Workers in nine eastern states and Washington, D.C., walked off the job on April 13. They had been working without a contract since August. So far, negotiations have been unsuccessful.

The unions said they're calling on Verizon to drop demands for worker concessions affecting job security, and health and retirement benefits. Verizon has said the company recently exchanged several proposals with the unions, but its efforts continue to be met with opposition.