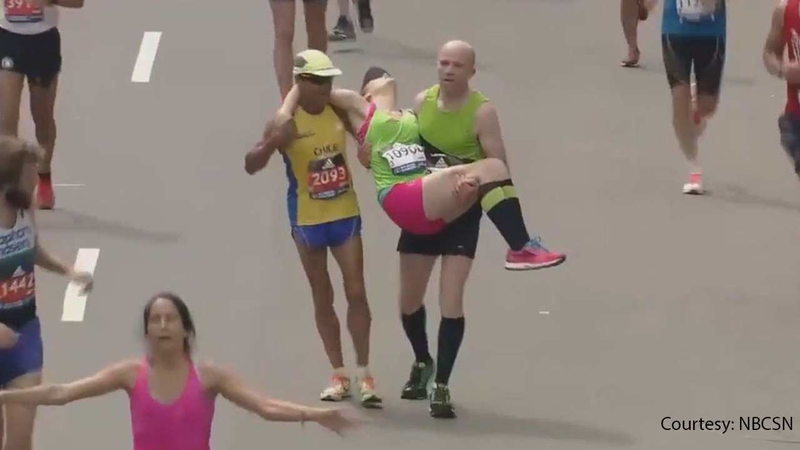 "At around mile 18 the sun came back out and I kept thinking there is no place to hide," Bowe said.

It didn't cool down. But Bowe kept running hard, maybe too hard because with the finish line before her, just several yards in front of her, Bowe had nothing left.

But then, two fellow runners help her along, supporting her for a bit as her legs just cannot summon the strength.

Then, they pick her up and literally carry her the last several yards all the way to the finish line so that she can step across it.

"I do remember the two men carrying me for a little bit, but I don't really remember finishing. I'm very grateful that they put me down right before the finish line so that I could walk over it, that really touched me seeing it on the video, and I can't thank them enough for being there to help me," Bowe said.

The man on the left is Terry Caning, a firefighter from Northern Ireland.

On the right was Mario Vargas, a runner from Chile, who Bowe tracked down on social media.

"The fact that he was that close to the finish and he was willing to sacrifice some time on his race to help me is incredible and he's just said things like, 'You know I run many races, just stay positive, hopefully the marathon will treat you better next time,'" Bowe said.