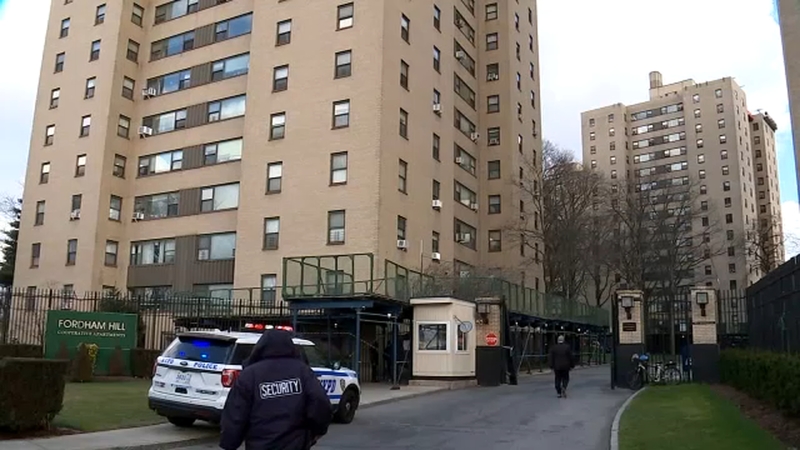 FORDHAM MANOR, Bronx (WABC) -- An 8-year-old boy who shot himself in the head inside a Bronx apartment after finding his father's gun is expected to survive.

The incident happened inside Fordham Hill Oval in Fordham Manor at building five on the fourth floor at around 12:30 p.m.

The child's father, 43-year-old Rajon Grant, was arrested later Monday night and charged with criminal possession of a weapon and endangering the welfare of a child.

The unlicensed gun, which appears to be a .9mm., was stored in a safe in the closet, but it is unclear if the closet or safe was unlocked. There was only one live round in the gun when the boy found it.

The boy was taken to NewYork-Presbyterian/Columbia Hospital in critical but stable condition. He had surgery on Monday evening.

Neighbor Eric King said he was live streaming a Knicks game for a Facebook group when two siblings of the boy came running over and frantically knocked on his apartment door.
EMBED More News Videos

A neighbor called 911 after discovering the boy unresponsive at a Bronx apartment.

"I didn't hear no shots," he said. "I had my TV up loud because I was live streaming the Knick game, so I did not hear the shot. But I started hearing yelling and screaming, and then all of a sudden, a ferocious banging on my door."

King said he then went to their apartment where he saw the victim on the floor with his eyes open, bloody and unresponsive. He then ran back to his apartment to call 911.

"I just saw blood and everything on the floor," King said. "I didn't want to waste any time, so I just called 911."

Councilman Fernando Cabrera, who lives at the complex, described the scene outside of the building.

"So I was I was coming to drop my wife, and then all of a sudden I saw all the ambulances coming here and there were police cars that came from all over the place," he said. "And so I ran inside to see what had taken place. As I proceeded to come forward, I saw the ambulance that were bringing into child. They were very expeditious about that. They brought him in, they got him stabilized and then they proceeded to take him to the hospital."

Authorities say the mother was at the apartment building, but not in the actual apartment when the shot was fired.

Cabrera said the mother was traumatized about the incident. He added the father was not at the building.

"The father, upon hearing about it, came to the gates," he said. "He tried to rush in to try to get to the apartment."

Grant reportedly told police, "I've had the gun for 10 years. I bought it from a guy. I left it in the safe. I never registered it."

"It was just maybe a case of careless, not safeguarding the weapon," he said.

Cabrera says the good news is that the bullet didn't penetrate the child's skull.

The shooting remains under investigation.

Grant was arraigned on Tuesday and issued bail of $5,000 cash, $10,000 credit card/insurance bond/partially secured bond at 10%. The case is due in court next on January 22.

A search is underway for the gunman who killed a 23-year-old man on Staten Island.