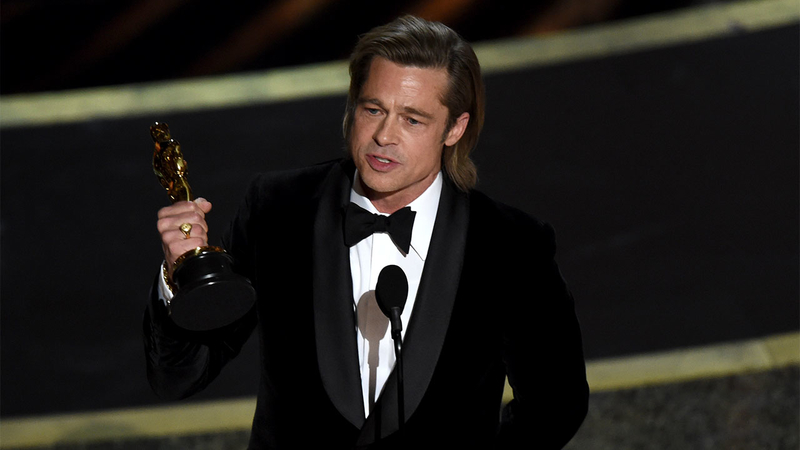 Oscars 2020: Brad Pitt wins Best Supporting Actor for 'Once Upon a Time in Hollywood'

LOS ANGELES -- Brad Pitt got political in his Oscar acceptance speech, slamming the Senate's impeachment trial after winning best supporting actor for his role in the Quentin Tarantino-directed "Once Upon a Time...in Hollywood."

"They told me I only have 45 seconds up here, which is 45 seconds more than the Senate gave John Bolton this week," Pitt said, a nod to the Senate's vote not to allow witnesses at President Donald Trump's impeachment trial earlier this month.

"I'm thinking maybe Quentin [Tarantino] does a movie about it. In the end, the adults do the right thing," he added.

Pitt went on to thank Tarantino for being "original" and "one of a kind," adding, "The film industry would be a much drier place without you." He then thanked his co-star Leonardo DiCaprio, saying he would "ride on his coattails any day, man."

He continued to thank the rest of his cast and crew, specifically calling out his stunt coordinators, before dedicating the award to his children, who he said "color everything I do."

The award was Pitt's first acting Oscar. He has an Oscar from "12 Years a Slave," which won best picture in 2014.

He was honored for his role as Clint Booth, a stunt double for Leonard DiCaprio's actor character in the film about the Manson family murders that shot at locations in Hollywood near the Dolby Theatre, where Pitt accepted the first award of the evening.

"I'm not one to look back but this has made me do so and I think of my folks taking me to the drive-in to see 'Butch and Sundance,' and loading out my car and moving here," he said, choking up. "... to all the wonderful people I've met along the way, to stand here now: 'Once upon a time in Hollywood.' Ain't that the truth."

His Oscar resume includes four acting nods and three for producing, including a win for "12 Years a Slave."

Pitt exuded charm and bonhomie as a heavy favorite throughout this awards season, giving funny speeches while collecting trophies at the Golden Globes and SAG Awards. Even co-star Margot Robbie was humorous in serving as his proxy at the BAFTAs.

In earlier speeches, Pitt joked about DiCaprio and director Quentin Tarantino, and via Robbie zinged Brexit and Prince Harry and Meghan Markle's departure from their royal roles in Britain. He mocked himself as well, joking about his personal life and wearing a name tag to the Oscar nominees luncheon.

Pitt acknowledged backstage that he'd had some speech writing help along the way.

"Historically, I've always been really tentative about speeches, they make me nervous," he said. "So this round, I figured if we're going to do this I'd put some real work into this trying to get comfortable. This is the result of that. I have some very, very funny friends that helped me with some laughs. It's got to come from the heart."

Backstage, Pitt explained his reference to the impeachment hearings, which ended in an acquittal for Trump.

"I was really disappointed with this week," he said. "When gamesmanship trumps doing the right thing, it's a sad day and I don't think we should let it slide. I'm very serious about that."

The 56-year-old Pitt, who grew up in Springfield, Missouri, first gained widespread attention in the 1991 film "Thelma & Louise," where his love scene with Geena Davis initially defined him as a sex symbol.

Pitt's ex-wife, Angelina Jolie, won a supporting-actress Oscar in 1999 - years before she and Pitt got together. They share six children.

The other nominees for supporting actor were Hanks of "A Beautiful Day in the Neighborhood," Hopkins for "The Two Popes," and Pacino and Joe Pesci for "The Irishman."

Hanks was last nominated 19 years ago, while it had been 22 years for Hopkins, 27 years for Pacino and 29 years for Pesci. Pitt was the only man in the category who had never won an acting Oscar.

"It has been a really special run," Pitt said backstage. "I think it's time to go disappear for a little while now and get back to making things."