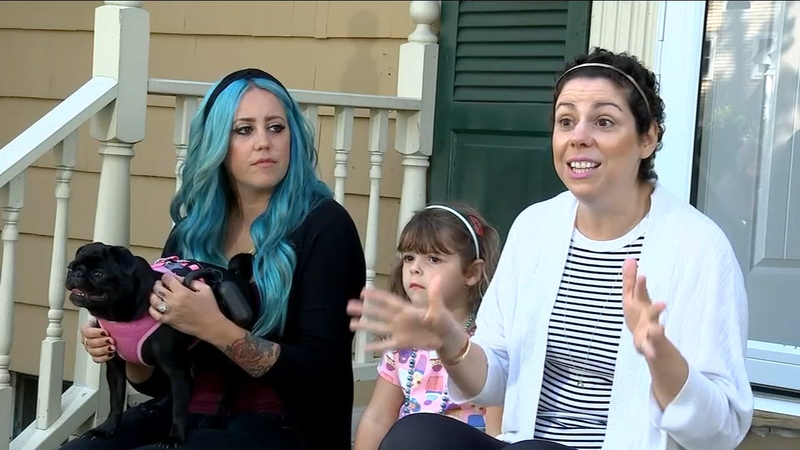 WAYNE, New Jersey (WABC) -- A pair of sisters in New Jersey say they discovered their breast cancers because of a pet dog.

Amanda says she discovered her tumor when her pet pug named Daisy jumped on her.

"This one jumped on my chest and I was like 'ow that kind of hurt," Amanda said.

Later, Amanda's older sister Amy found a lump while she was watching television in a t-shirt, but without a bra on which is important to note because she says when she put the bra on she couldn't feel it anymore.

She says it felt like a "clementine, but it was not protruding. I know it sounds very large when I'm saying it."

It turned out to be stage three breast cancer, doctors also found cancer in her lymph nodes.

So both sisters, in their mid-30s got double mastectomies, but Amy also had chemotherapy and radiation.

Their doctor says their prognoses are good.

"This is definitely a first for me. Generally we recommend screening mammograms, but whatever way we can discover things as quickly as we can," Dr. Deena Mary Atieh Graham said.

Amanda says Daisy is the reason they were able to find it fast.

"I 100% know it was her. And throughout my entire recovery she's never left my side," Amanda said.

Daisy was a gift from her husband Steve.

The sisters are now urging everyone to get checked.

"If you have any kind of inkling or you feel anything, even if you're under the age of 40 where you normally wouldn't get mammograms, just go to the doctor get it checked," Amanda said.

"Don't assume you're in clear if you test negative for the BRCA gene because none of us had that, but yet we still have this, Amy said.