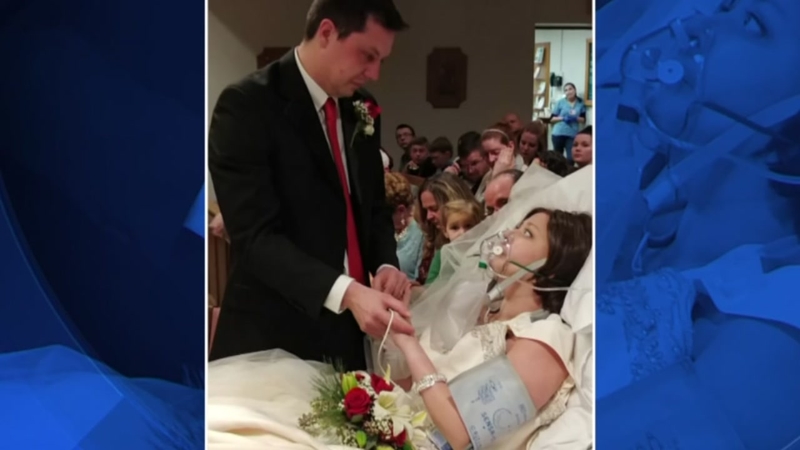 Woman with cancer marries hours before her death

HARTFORD, Connecticut -- When many couples look back at their wedding photos, they feel joy. For one groom, a photo taken of him next to his wife two weeks ago leaves him with bittersweet feelings.

Just a few days before Christmas, David Mosher was wed to his wife Heather in a ceremony at St. Francis Hospital, where she was fighting breast cancer. A mere 18 hours later, he became a widower.

"Nobody thought she would've made it that far," he said. "She proved them all wrong, and that's what that photo says to me."

After less than a day as husband and wife, Heather Mosher lost her battle, but her bridesmaid remembered her as being valiant in the face of the unknown.

David and Heather were swept up in a whirlwind romance two and a half years ago after meeting at a swing dance class.

"We were just kind of inseparable after that," David said.

But then, on December 23, 2016, Heather was diagnosed with breast cancer.

"She didn't know I was going to propose that night, but I said to myself, she needs to know she's not going to go down this road alone," David said.

A carriage propelled by a pair of draft horses surprised Heather, who went on a ride with her beau after he proposed under a street lamp.

Five days later, the couple learned Heather's diagnosis was triple negative, one of the most aggressive forms of breast cancer.

In September, after months of doctor's appointments and treatments, there was more bad news: David and Heather learned the cancer had spread.

With precious little time left, the couple married each other in a ceremony before family and friends right there at the hospital.

Their wedding picture is forever a symbol of triumph in the face of death.