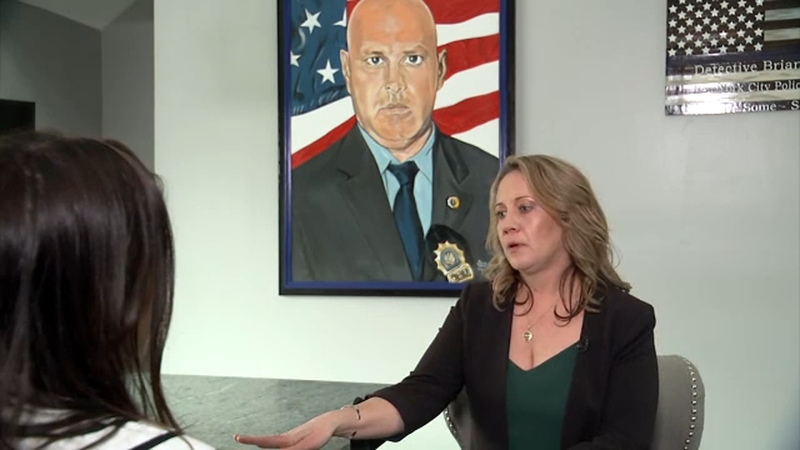 CALVERTON, Long Island (WABC) -- Eyewitness News sat down Tuesday with the widow of fallen NYPD Det. Brian Simonsen who was killed in the line of duty one year ago.

Leanne Simonsen met with Eyewitness News reporter Kristin Thorne at her home in Calverton. She said she feels like each day she's just surviving.

"Every day I wake up and I still can't believe it's true," she said.

Simonsen, a 19-year-veteran of the NYPD, was accidentally shot by one of his fellow officers while responding to a robbery at a T-Mobile store in Richmond Hill on February 12, 2019.

Simonsen and NYPD Sgt. Matthew Gorman were in the area working on an unrelated case when the call came in and they went to investigate. They arrived at the scene the same time as other officers.

Police said the suspect, Christopher Ransom, was carrying a fake weapon and charged at officers. Seven officers then fired 42 shots from both sides of the store, striking Simonsen.

Simonsen was shot in the chest and died on the way to the hospital.

Since Simonsen's death, the NYPD has conducted retraining for officers and has distributed 550 new lightweight, bullet-resistant vests to detectives.

Simonsen was not wearing his bullet-proof vest when he responded to the scene. While NYPD patrol guidelines state detectives must wear vests when performing enforcement duty, such as making an arrest, it is otherwise up to the detective.

NYPD Commissioner Dermot Shea said the design of the new vests began the day after Simonsen's death. The slimmer, lightweight vest is easier to wear over a shirt and tie, which is common dress code for detectives.

Leanne Simonsen worked with the NYPD on the new design.

"It's not only preventing one of their deaths, if I can prevent somebody living what I'm living through," she said.

Det. Simonsen was an organ donor and Leanne Simonsen hopes others will consider giving the gift of life. She said people out there are fortunate to have a piece of her late husband.

"What a great gift that is to them to even get the gift of life, as well as a piece of his soul, because he hands-down was the best," she said.

The NYPD said it will launch an internal organ donation campaign this week to encourage officers to sign up to be organ donors.

Leanne Simonsen said she's also become active with a foundation in her husband's honor which gives college scholarships to a local varsity student-athlete.

A private memorial service will be held for Detective Simonsen Wednesday in Queens.

To become an organ donor in New York, visit www.liveonny.org.