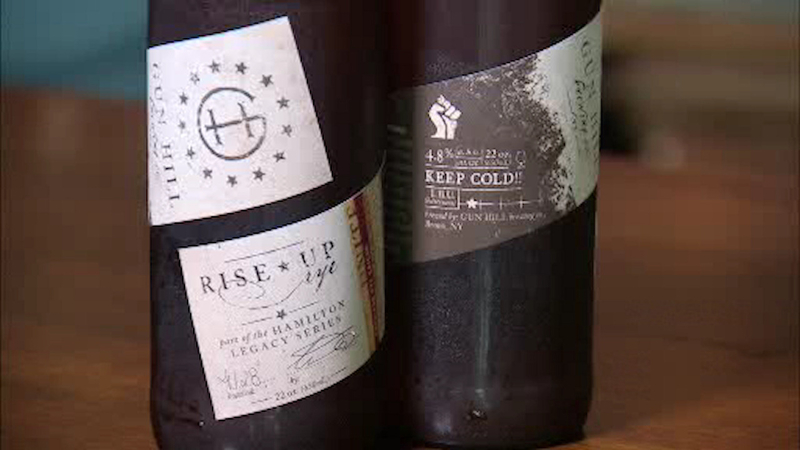 NEW YORK (WABC) -- Broadway and beer are two things you might not put together, but one Broadway actor sees it differently.

"Broadway fans will camp out for a ticket and craft beer fans are the same, they travel thousands of miles and camp out for days," said Jimmy Ludwig,

Ludwig hosts a videocast called "The Happy Hour Guys". It occurred to him to combine his two passions in yet another way.

"We're going to take a Broadway show and a New York brewer, and we're going to put them together and brew a beer for charity," Ludwig said.

The first product is a beer called "Rise Up Rye" inspired by the hit show "Hamilton".

It's being produced by Gun Hill Brewery, which like the show "Hamilton" taps into American history.

"Gun Hill, you know, is a historic place in the Bronx a real battle here, proud of that. It was almost a perfect fit," Ludwig said.

In fact, before "Hamilton" even made it to Broadway, the brewery made a beer called "Schulyer's American Wheat", named for the Schuyler sisters, who are also main characters in the show. This new beer is all about the rye.

"Which adds spiciness to the end. A little spiciness in my beer," Ludwig said.

Members of the cast had a hand in making it on site at the brewery.

The beer launched on Saturday and a portion of the sales will go to Graham Windham, a nonprofit that was started by Alexander Hamilton's wife in 1806 and continues to help New York City children today.

Rise Up Rye is a craft beer that's creating some buzz.