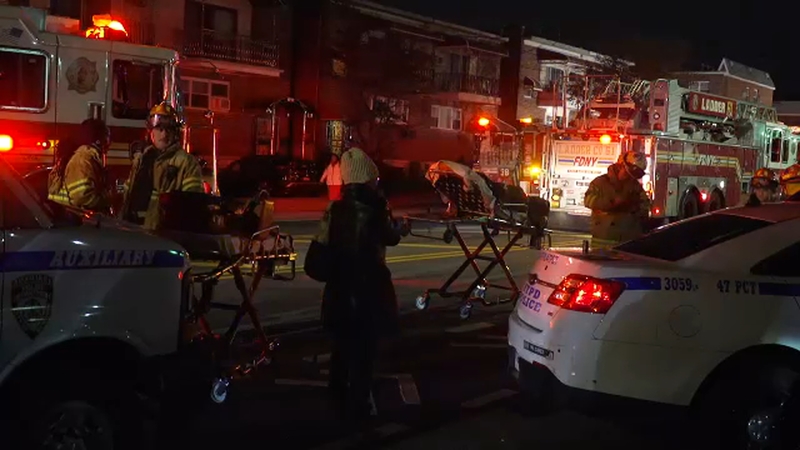 WAKEFIELD, Bronx (WABC) -- Fourteen police officers were injured while helping residents escape a fire that tore through an apartment building in the Bronx late Tuesday.

The fire broke out around 11 p.m. in a building on Baychester Avenue in the Wakefield section.

The officers rushed into the building and began knocking on doors, alerting residents and assisting their evacuation.

NYPD Chief of Department Terrance Monahan tweeted his congratulations to the officers involved for their life-saving efforts.

We’re all proud of the @NYPD47Pct cops who rushed into a #Bronx apartment building that was on fire last night and rescued residents. Thankfully, nobody was seriously injured. It’s courageous acts like this that earn our officers the name — NY’s Finest. pic.twitter.com/0RiyVGfxXa

Officials said they knocked on approximately 70 doors, and no serious injuries were reported among the residents.

When officers on patrol in the Bronx’s @NYPD47Pct saw fire coming from a nearby apartment building, they didn’t hesitate... they rushed in. Working with our @FDNY partners, they evacuated over 100 residents. Thankfully, no one was seriously injured pic.twitter.com/LfoKrBw8lw

The officers were treated for smoke inhalation at a local hospital and released.

Two families were left homeless, and one resident was treated for asthma that was aggravated by the smoke.

Investigators believe the fire may have been caused by an unattended candle.