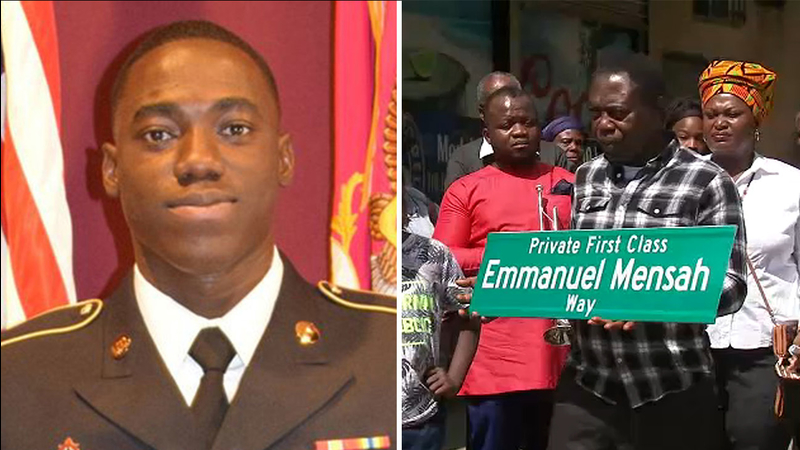 BELMONT, Bronx (WABC) -- A Bronx street was renamed after a hero soldier who died saving four people's lives in a Bronx fire that killed 12 in 2017.

Family, friends, and clergy gathered at the intersection of East 187th St. and Prospect Avenue to honor Pfc. Emmanuel Mensah, a 28-year-old immigrant from Ghana and a member of the Army National Guard, during the unveiling of "Private First Class Emmanuel Mensah Way."

His father, Kwabna Mensah, began to cry during a trumpet player's performance.

"I think about my son a lot. I wish he was here with us, but unfortunately, he's not here with us. So emotionally, it's dawned on me all the time. Especially (since) I'm still living close to where he perished, and anytime I pass by, the memory comes back," he said.

Mensah initially escaped the December 29 fire at 2363 Prospect Avenue but reentered the burning building at least three times to rescue other residents and family members.

It was the deadliest fire in New York City in at least a quarter of a century.

PHOTOS from the scene of the 2017 Bronx fatal fire: