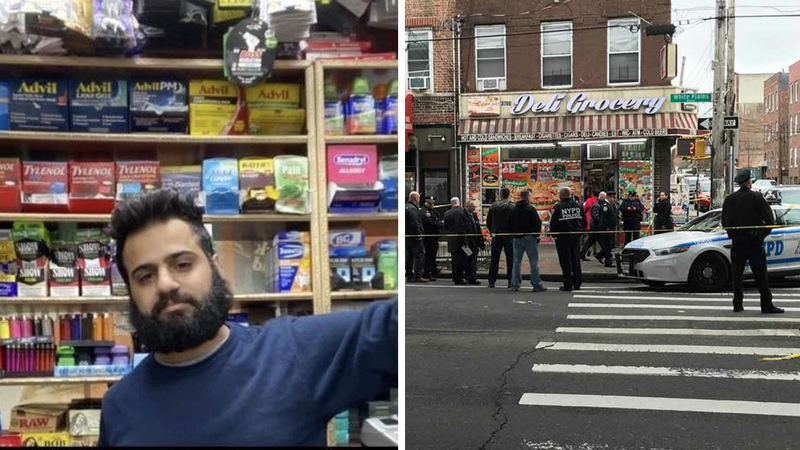 WILLIAMSBRIDGE, Bronx (WABC) -- At least one arrest has been made after a deli clerk was shot dead Tuesday in the Bronx, police say.

The shooting occurred just before 11:30 a.m. at the intersection of White Plains Road and East 216th Street at Deli Grocery in Williamsbridge.

Police say the 20-year-old victim from Yemen, later identified as Mohammed Qutaish, was taken to Montefiore Medical Center where he was pronounced dead.

A male suspect fled on foot with a 25-year-old woman, according to authorities, but were quickly taken into custody. The NYPD also recovered a weapon at the scene.

A 28-year-old man, Adrien Topping, was arrested later Tuesday night on charges of murder, manslaughter and criminal possession of a weapon. Police questioned the woman but she was released.

While frightened customers hit the floor, witnesses say the clerk who was working behind the counter at the deli didn't have a chance.

"When the guy went to get his gun, he didn't know he was coming for him," said the eyewitness, who didn't want to be identified. "He was just there. He couldn't do nothing about it."

The witness said he was ordering food when a woman came into the deli to buy a single cigarette, which is illegal.

"He wouldn't sell her those cigarettes," the eyewitness said. "She started behaving erratically, starting cursing at him, 'I'm gonna go get my man.' Her man went and got her gun, came back in the store and killed him."

The witness said Qutaish was shot in the face first, then the back.

"He just got engaged," the victim's friend said. "He just told me like a week ago he wanted to go on vacation next month and do all that and see his family."

Despite initial reports, Qutaish was not making a sandwich at the time, according to the witness, saying he had his register open because they were in the middle of a shift change.

The witness said there were two other customers in the store at the time.

Other customers said Qutaish was fairly new to the store but was friendly to everyone. He sent money back home to his family and was simply trying to plan for a better future.