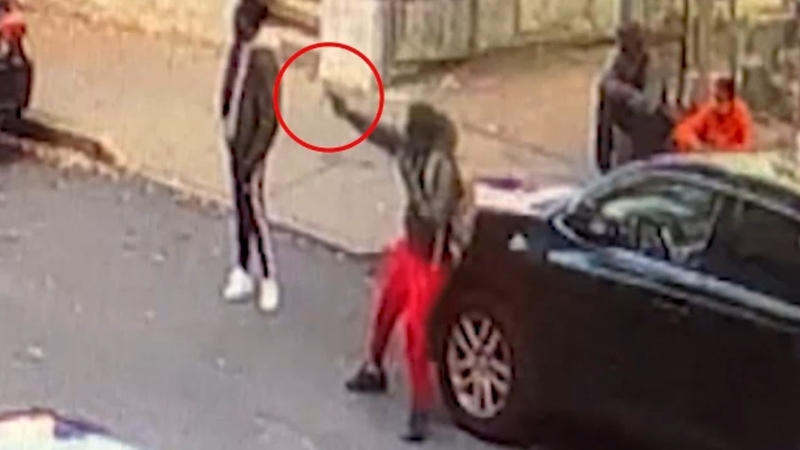 WAKEFIELD, Bronx (WABC) -- Police are investigating a drive-by shooting in the Bronx that left an innocent bystander injured on Wednesday.

Surveillance video shows the moments of a drive-by, as a black sedan speeds past and opens fire on a group of men in the street.

One of the men happened to have a gun in his pocket and fired back.

The shooters missed each other but they did hit someone.

Police say a 52-year-old woman was shot in the leg around 3:15 p.m. on East 224th Street in the Wakefield section of the Bronx.

They say the woman was an innocent bystander walking on the sidewalk when she suddenly heard shots fired and felt a pain in her leg.

For hours, cops catalogued the crime scene, picking up bullet casings and even swabbed party cups left behind.

For neighborhood residents, they say it's become a familiar sight.

One man says shootings here have noticeably increased since June, when in the name of police reform, the NYPD disbanded its undercover anti-crime unit, which had targeted guns across the city.

"That time when the commissioner ended that plainclothes unit, that was it, everything went crazy," he said. "He needs to bring back that unit. Too much guns. You have these guys coming out trying to settle their issues and everything, and you have innocent people getting shot."

The 52-year-old innocent bystander is expected to survive her injury.

She was taken to Jacobi Hospital.

Meanwhile, the search is on for the men in the surveillance video.