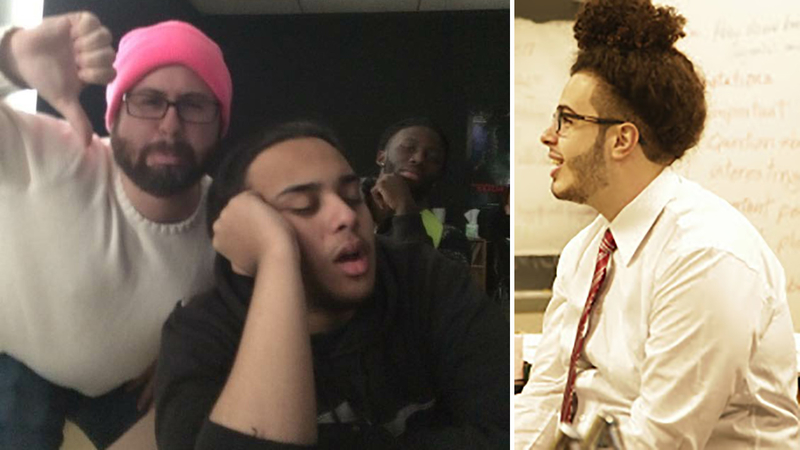 Tv, social media included in curriculum at The Cinema School in Bronx

SOUNDVIEW, Bronx (WABC) -- A high school in the Bronx with a 96 percent graduation rate -- nearly 30 percent above the borough-wide average of 67 percent -- credits its success to its unique curriculum.

Every student makes a Senior Thesis Film that is 12 to 17 minutes in length, but many students graduated having completed multiple films.

"We have to engage students with what they encounter in their everyday lives," film teacher Jacob Stebel said. "Our students are watching things constantly and there has to be a time during the day when that gets addressed and taught."

Rather than discouraging teens' consumption of TV and social media, Stebel said the high school embraces it.

Stebel said he's turned the TV shows and movies kids are already watching into the hook that gets them committed to attending school and paying attention in other subjects.

Stebel added that film-making also requires students to use their understanding of other subject areas.

"If you're making a historical fiction, what era is it in? What should we not see?" Stebel said. "We are also teaching students, especially hesitant readers, how to become enthusiastic readers."

Stebel has said he's seen struggling students who may have never attended college or may not have even graduated, motivated to work in the entertainment industry, make remarkable turnarounds in their studies.

One of those students was 21-year-old Chris Negron, who Stebel met his first year teaching.

"I remember other teachers talking about him, being like, 'Oh, this kid Chris, he's a nightmare behaviorally," Stebel said. "I kind of saw something in him."

Negron admitted he hadn't been taking his education seriously prior to having Stebel as a teacher.

"I found myself thinking I wouldn't go to college," Negron said.

"He's a real mentor in my life. The main thing he would tell me is, 'You have it all right in front of you. It's up to you to make it happen.' And that advice always stuck with me," Negron said. "I was like, 'Yeah, I need to get my act together in order to do the things I want.'"

Negron graduated The Cinema School with an above 90 percent average and is now attending Fordham University, where he's studying journalism.

"It's hard to do that when your academic record for your first two years aren't what they should be," Stebel said. "He is 21 now and he is who I wish I was when I was 21, just so mature and capable. He's wonderful."

Negron may have been Stebel's first success, but Stebel said he's encountered so many students similar to Negron.

"I've seen this happen a bunch of times and it's the most amazing thing ever because you know you had a small part in helping that student find their voice," Stebel said.

Stebel said he hopes The Cinema School and his film curriculum serve as a model for other schools and demonstrates the opportunity teachers have when they truly engage students in their learning.
EMBED More News Videos