Brooklyn building collapses after being struck by out-of-control car 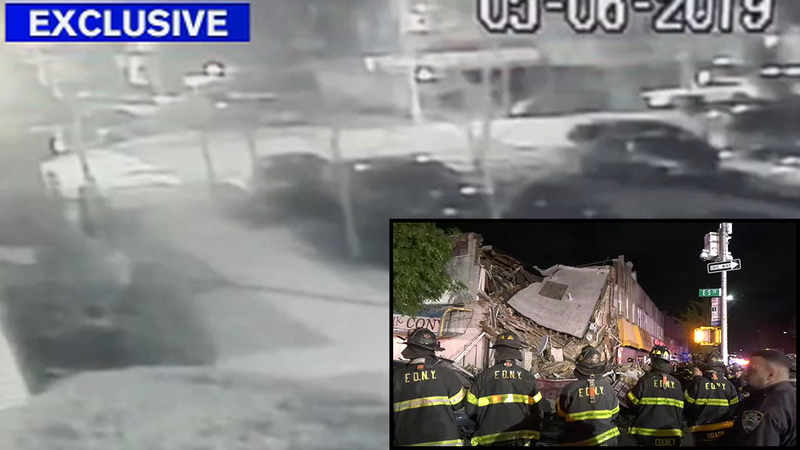 NYC building collapses after being struck by out-of-control car

MIDWOOD, Brooklyn (WABC) -- A Brooklyn man is facing charges after an out-of-control car crashed into a building late Monday, causing it to collapse it into a heap of rubble.

The driver slammed into the building on Avenue P in Midwood just before 11:30 p.m.

The vehicle crashed all the way into a vacant former convenient store, undermining the stability of the two-story corner building.

Exclusvie video of the moment of impact:

Just got this surveillance video showing the moment of impact when a speeding car took down an entire building at Ave P and E 5 in Brooklyn last night #abc7NY https://t.co/HXNpiGfpzf pic.twitter.com/sfarp7DYb7

Authorities say the 20-year-old driver, Andrew Baird, got out of the rental car and tried to run away on foot but was quickly captured.

He was taken to the Lutheran Hospital with serious but non-life threatening injuries.

Baird, an MTA employee, was arraigned Wednesday on charges of leaving the scene of an accident and driving while consuming alcohol under age 21.

There are also reports that a passenger may have run away from the scene.

Speed is believed to be a factor in the crash. The vehicle was estimated to have been traveling at least 63 mph in a 25 mph zone.

"His car is still underneath there, and it's unbelievable because you can't see anything," photojournalist Simon Gifter said.

Gifter shot video of Baird being escorted by police to an ambulance, just moments after concrete and bricks came crashing down on top of him.

It was the Flatbush Shomrin, a Jewish neighborhood watch group, that first found the driver a few blocks away and detained him until police arrived.

"He was all bloodied up, really banged up," Gifter said. "I mean, it was a miracle that that guy was able to even get from here and make it to Ocean Parkway and Kings Highway."

Five residents who lived in the building's second floor were not home at the time of the collapse.

Both their building, 496 Avenue P, and the adjacent 494 Avenue P were evacuated. The occupants from 492 Avenue P were allowed to re-enter.

The Office of Emergency Management used a drone to fly overhead to determine how best to safely take down what remains of the structure and the safety of the buildings next door.

"Buildings will have to determine the stability of that occupancy before they are allowed to reoccupy," Brooklyn Borough Commander Asst. Chief Wayne Cartwright said.

It's not the first time the Department of Buildings has been called there.

Nine years ago, city records show someone complained of falling debris from the very same building.

Inspectors found that "steel lintels were rusting" along with non-structural cracks on the exterior.

In this crash, it seems that the vehicle had dislodged several vertical supports in the building.

Meanwhile, the residents who lived upstairs are displaced.