Dog electrocuted while walking over metal plate in Brooklyn 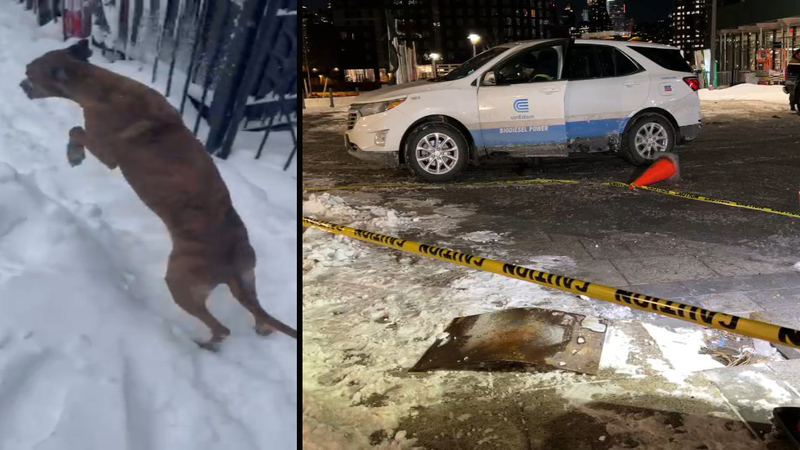 Dog electrocuted while walking over metal plate in Brooklyn

GREENPOINT, Brooklyn (WABC) -- A beloved 4-year-old dog named Lala was electrocuted when she stepped on a metal plate during a walk in Brooklyn Monday evening.

It happened around 7:15 p.m. outside 1 Bell Slip near Commercial Street in Greenpoint.

Owner Lida Bilokur says she was at dinner when she got the call that her mixed-breed emotional support dog was dead.

"I take her everywhere," she said. "This was one night I didn't take her."

Unfortunately, Lala did not survive her injuries.

"It doesn't feel real," Bilokur said. "She's my best friend, my dog. She's an emotional support animal, so she's highly trained and I take her everywhere."

Bilokur's friend Lauren Green was walking Lala at the time.

"Her dog immediately started screaming and fell over and stopped breathing," Green said. "Someone came over and gave Lala CPR, but she didn't survive."

That someone was Julia, who was with her own dog inside the JoJo & Co. Pet Club when Green ran in hysterically crying and asking for help.

"The seizure had stopped," Julia said. "I tried CPR, so push on chest and blew into the nose, and it didn't work."

A construction worker also came over to help and simply put his hand near Lala when he too was shocked.

He was hospitalized but not seriously injured.

Con Edison determined a street lamp had been removed from that exact spot, and the piece of steel over the hole was hot, carrying electric current.

"Frustrating, it's sad, I'm angry," Bilokur said. "No one has come out and taken accountability. It's clearly a negligent situation."

The incident happened right next to the sprawling Bell Slip apartment complex, managed by Greenpoint Landing. A spokesperson released the following statement:

"As a result of this week's winter storm, an underground electrical wire was inadvertently exposed to snow and salt, which caused a temporary live charge in a metal plate on the ground. Immediately after learning of this and the accident it caused, we worked with the City and Con Edison to fix the issue. The entire site has been evaluated and deemed safe. The safety and well-being of our community members is our top priority. We extend our heartfelt sympathies and are taking every step necessary to prevent this from happening again."

In similar cases, when insulation around wires deteriorates, many times from salt, it sets up this very dangerous situation.

"I think it's so sad, it's horrific," pet club owner Carmen Akella said. "I think that being able to walk your dog shouldn't be something that becomes a worrisome situation of stressful one, and a lot of my clients are really worried right now. Because they might step on the wrong thing, and their dog could be gone in an instant."