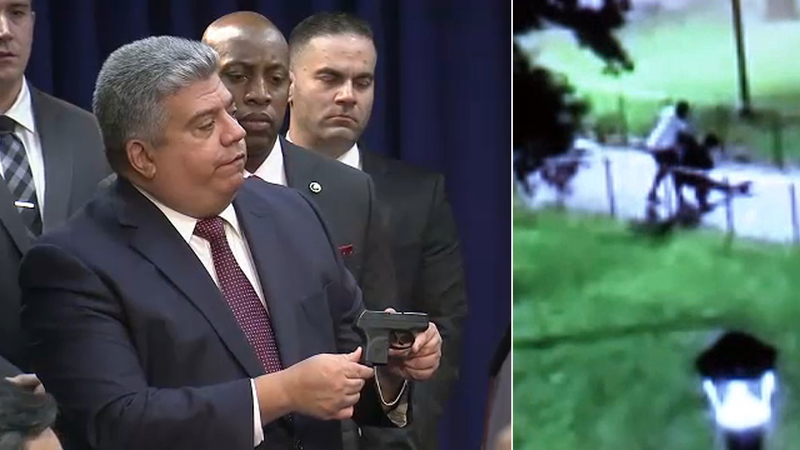 Brooklyn District Attorney Eric Gonzalez and NYPD Commissioner Dermot Shea detailed the arrests of 34 people, some of whom prosecutors say targeted and exploited young women by using them to move guns.

"This indictment reflects the commitment of my office and the NYPD to continue to work together to target those individuals responsible for senseless shootings that endanger innocent people," Gonzalez said. "We allege that these gang members' primary activity is to track rivals and to shoot at each other on sight on the streets of Brooklyn. This is outrageous and will not be tolerated. I am confident that this takedown, which is focused on drivers of violent crime, will have a measurable impact on public safety by targeting the offenders who commit the violence in our communities."

The defendants face up to 25 years in prison on the top conspiracy charge.

"When violent rivalries by street gangs inflict harm in our city's neighborhoods, we answer with precision policing, arrests and solid prosecutions," Shea said. "Our NYPD detectives' work in this case, together with the Brooklyn District Attorney's Office, will undoubtedly keep residents of Northern Brooklyn safer."

The NYPD's Brooklyn North Gang Squad and the District Attorney's Violent Criminal Enterprises Bureau conducted a long-term investigation into violence perpetrated between these two rival criminal organizations from February 1, 2018, through the date of the indictment.

It is alleged that between those dates, the gang members engaged in a type of war where they would search or hunt for rival members in rival territories and then shoot them on sight. Shootings were conducted by both sides in a game of one-upmanship, to embarrass rival gang members and to contest geographic dominance over territories in which the rivals resided.

It is also alleged that some of the suspects specifically targeted and exploited younger females to carry guns for them, i.e., act as "holsters."

It is alleged that the teenage girls would carry the guns while the gang members walked nearby and directed the girls to various locations providing the weapons as needed for the purposes of shooting rival gang members.

The girls were allegedly not expected to face any gun charges if arrested, in the hopes they would receive a lesser sentence due to their age and gender.

Furthermore, Tyquan Ellison, 20, and Jayquan Wise, 19, are charged with first- and second-degree rape for having sex with a 14-year-old girl. Ellison is also charged with sex trafficking in order to enhance his status within the gang by allegedly forcing the 14-year-old girl to have sex with Wise.

Among the incidents charged in the indictment are nine counts of attempted murder related to shootings in which individuals, including innocent bystanders, were struck and four counts of reckless endangerment related to four additional shootings, including:

--On July 13, 2018, members of one of the gangs went to Brooklyn Supreme Court at 320 Jay Street for the court appearance of Jayquan Wise, aka, JayDee. Following the court appearance, the defendants went to the nearby Fulton Mall area, where they engaged in a verbal and physical dispute with rival gang members. During the altercation, it is alleged defendant Equan Ware pulled out a firearm and shot at opposing gang members, striking a rival gang member as well as two innocent bystanders.

--On September 17, 2018, at approximately 12:49 a.m., Carlton Darby allegedly walked up to a building at 250 Lott Avenue and fired a gun multiple times. One of the bullets went through a window into an apartment where two young children were sleeping. No one was injured.

--On October 29, 2018, at approximately 5:50 p.m., at 394 Dumont Avenue, Tyliek Cannadate opened fire and repeatedly shot at a group of approximately five people standing outside of a playground in the Tilden Houses. Two individuals were injured.