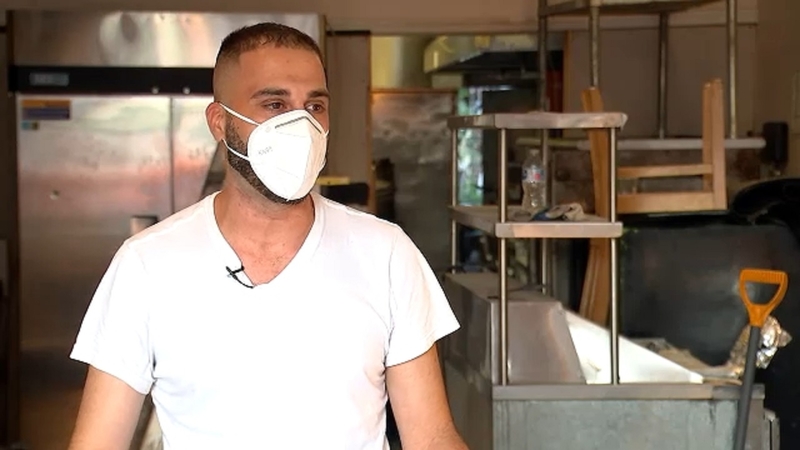 BAY RIDGE, Brooklyn (WABC) -- Some would say Sammy Hamden is brave to try and open a restaurant in the middle of a pandemic, but his true bravery came out Monday night when an armed robber took a shot at him in close range.

The bullet struck the refrigerator and went through the wall behind Hamden. It happened 10:30 Monday night on 86th Street in Bay Ridge, a busy commercial strip. Hamden and his helpers were working late into the night renovating when an armed robber walked in and almost took his life.

Thankfully, Hamden fell backward, and as he did, the bullet just missed his chest. He says the violent robber then tried to shoot him while he was down, but the gun jammed.

Hamden is convinced it was a miracle he survived, but he is not sure he has another life to spare.

"There's no doubt about it, God saved my life in this situation," he said.

Hamden tells Eyewitness News the gunman then fled on a motorized bike while he followed in his car - and the drama continued.

The suspect then crashed on the highway, jumped off the BQE onto the road below at 65th and 6th Ave, and punched a livery driver who would not give him a ride. He was finally arrested at a gas station at 65th and 7th Ave.

Hamden grew up in Brooklyn, has a family now, and is pouring everything into a Mediterranean restaurant. He promises that if Mayor de Blasio lets the armed robber go right back onto the street, that this will be the end of his love affair with New York.