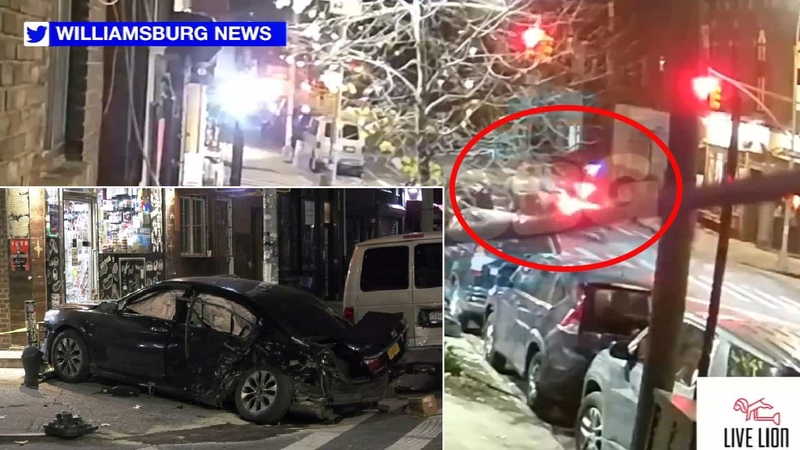 CLINTON HILL, Brooklyn (WABC) -- A passenger is fighting for her life after she was ejected from a for-hire vehicle when a speeding Dodge Charger ran a red light in Brooklyn early Monday, according to police.

The driver of the Dodge Charger blew the light at Bedford and Dekalb avenue in Clinton hill and crashed into the vehicle around 12:30 a.m.

Surveillance video showed the force of the crash, which sent the Honda Accord onto the sidewalk, where it came to rest in front of a deli.
EMBED More News Videos

The 32-year-old female passenger was ejected from the vehicle and rushed to Bellevue Hospital in critical condition.

"She looked lifeless when I saw her," one witness said. "Some crazy emotions...the lady was already on the road, just lying there."

The driver was in stable condition at the same hospital.

"I looked through the window, but I didn't even get to catch the car zooming by, that's how fast he was going," said a security guard at a nearby bank.

The driver of the Dodge Charger, identified as 22-year-old Ryan Ortiz of Middletown, New York, was taken to Kings County Hospital in stable condition.

Charges against him are pending the outcome of an investigation, and police say it isn't even the first time the same car was caught on video Sunday night pulling a dangerous stunt.

Authorities say the same Dodge Charger with an easily identifiable Scream face on its side, was seen doing donuts earlier in the night.

Despite initial reports that the vehicle struck was an Uber, the company says while the driver is registered in their system, he was not driving for them at the time of the crash.