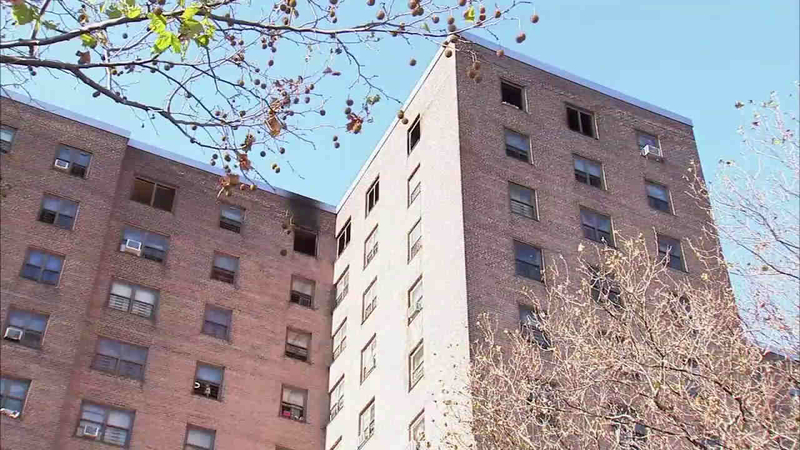 BROWNSVILLE, Brooklyn (WABC) -- A 1-year-boy died and two adults are fighting for their lives after a fire Wednesday morning at a high-rise in Brooklyn.

The boy, identified as Ivan Baez, was pronounced dead at Kings County Hospital.

In addition to two adults who are in critical condition, four others were being treated for serious injuries, said FDNY Commissioner Daniel Nigro.

Around 8:30 a.m., the FDNY responded to the Howard Houses, a NYCHA complex at 260 Mother Gaston Blvd., in Brownsville.

A fire had broken out in the kitchen of an apartment on the 13th floor. At the time, there were seven people in the apartment, and all were injured.

Smoke and flames were taking over the apartment.

"They were saying help, help, it was horrible, they were covered in smoke," said witness Debra Dickerson, who lives on the 12th floor directly below the unit.

"I heard a lady, a child and a man screaming for help and I seen a man hanging out and the black smoke coming out," she said.

Ivan and six others ranging in age from 40 years old to 8, another little boy, were in the apartment.

"The fire was just really hot, I was scared, very nervous, shaking," said witness Angela Hoye, Debra's daughter, who shot cell phone video and couldn't believe what she was seeing.

"Debris started falling because they were busting out windows and there was a tremendous amount of smoke and you could hear the screams," she said.

But the image of little Ivan is something Angela, who is also a mother, says she'll never forget.

"You know that 1-year-old turns into my 2-year-old when you see him so..he just had a diaper on and his body wasn't moving," she said. "The firefighter had his hand and something over his face and trying to give him oxygen."

Nigro said officials are unsure about the cause of the fire. "I don't yet know if they were using it for heating or if they were cooking, but after we interview those that we can speak to, we should know more," he said, when asked about the home's stove as a possible source of the fire.