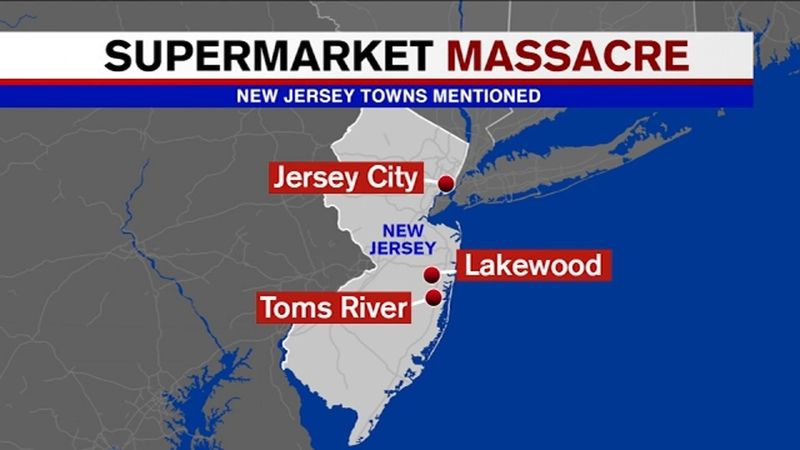 JERSEY CITY, New Jersey (WABC) -- The shockwaves from the tragedy in Buffalo are being felt in New Jersey after the shooter's writings mentioned three towns by name.

The shooter's long and detailed writings include the mention of several locations in the Tri-State region, but it is the portion about the three towns in New Jersey that has raised concerns, specifically Lakewood and Toms River in Ocean County and Jersey City located in Hudson County.

The shooter wrote specifically about the Hasidic community in these towns.

Of course, Jersey City had a horrible attack on the Jewish community in December of 2019, but the mayor said the suspect should not have used that incident to justify his murderous rampage in Buffalo.

"When you see the city being put back in the spotlight in a negative light, it's not favorable, we don't like to see that and of course you get concerned about people thinking more about Jersey City being a place that people aren't getting along as opposed to the way it really is," Jersey City Mayor Steven Fulop said.

Fulop got word that his city was mentioned in the shooter's writings from the head of police and said extra precautions are being taken in Black and Jewish areas of the city.

"We increased our presence from a police standpoint, particularly the Black community here in Jersey City because we want to make sure people feel safe and recognize that we're present but there's no indication of risks here to point that out as well," Fulop said.

According to the 180 pages of documents by the shooter, he says that some activities by the Jewish community are deplorable and any attempt to challenge the community is considered anti-Semitic.

The mayor of Toms River, Maurice Hill, is also aware of the mention of his city of 95,000 residents, being part of the shooter's writings.

"I find it disturbing that this attacker -- deranged attacker somehow singled out both Lakewood and Toms River, we're several hundred miles away from where he lives," Hill said.

Ocean County Prosecutor Bradley Billhimer also released a statement, saying that acts of "bias intimidation" will not be tolerated and that any bias incident or crime will be investigated and prosecuted, if necessary.

However, after reviewing the shooter's writings, Billhimer said that references to Lakewood and Toms River were copied by the shooter and incorporated into his document from a 2020 article written and published by a different author.

"I can state, unequivocally, that there is no evidence that the shooter had any intention or inclination to travel to anywhere in Ocean County," Billhimer said. "Furthermore, based on what we know at this time, the shooter has no ties to New Jersey. I have confirmed this information with the New Jersey State Police Regional Operations Center and the Federal Bureau of Investigation."


The Lakewood Police Department said they have stepped up patrols and are working with law enforcement partners to provide extra security in response to the events in Buffalo.