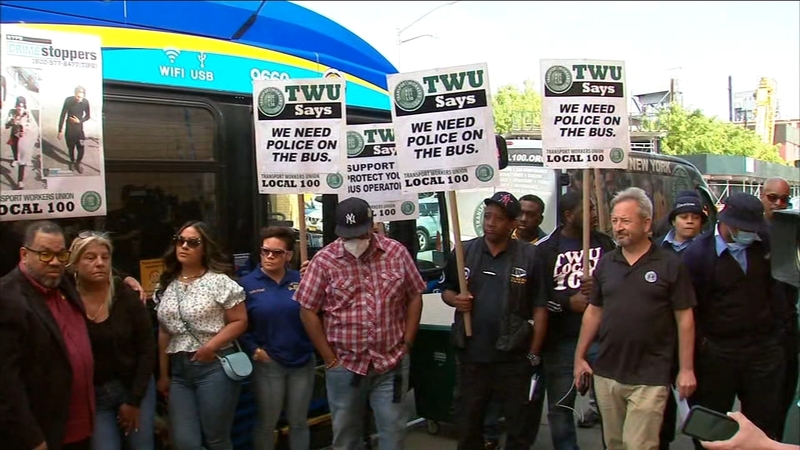 INWOOD, Manhattan (WABC) -- It happens somewhere in the city at least once a week. An MTA bus driver is assaulted by a crazed customer. Monique Rondon says she was beaten with a shoe.

"This big wooden heel. She hit me over the head," Rondon said. "She was upset that they cut her welfare case. I was a sitting target. I was doing my job. I was sitting behind the wheel. And she was upset at the system. Therefore, I guess I'm part of the system."

At a rally in Upper Manhattan Wednesday bus drivers demanded better enclosures to protect them from unruly riders-and police patrols on the city's most vulnerable bus routes.

They say the relatively small number of "step-on, step-off" spot checks by precinct police at a few bus stops is woefully inadequate.

Diane Delgado was struck in the face with a bottle. And Wilfredo Tineo says one of his riders spat in his face.

"I just want to let people know this is traumatizing," Tineo said. "This is degrading. This is disgusting. It is just so much emotion. This is what we deal with. You deal with this all the time."

Earlier this month, a driver was attacked and beaten after she refused to pull over in-between stops. The suspects in that case are still being sought.

Union officials say they want public assistance in the identification and arrest of the criminals who assault bus operators, including the duo who attacked a BX18 driver on May 5.

They are also demanding respect and civil treatment of bus drivers, COVID-19 heroes who brought essential workers to their jobs in hospitals, grocery stores, firehouses, and other work locations throughout the pandemic.

The drivers are asking that riders share their outrage over the regular physical and verbal attacks.

"They're assaulting us," Rondon said. "They're getting arrested, and they're right back out to do it again to another operator."

They want buses with "cockpit" designs, including wall-to-wall, floor-to-ceiling barriers, making it impossible for a rider to reach the operator.

Finally, drivers want a penal code amendment elevating spitting from a violation to a misdemeanor.
As a violation, police can not take any action unless an officer actually witnesses a spitting incident.

At a press conference, Wednesday MTA Chairman Janno Lieber told reporters he sympathizes with his workforce, insisting that the agency is campaigning for tougher penalties for lesser crimes like spitting, which is no longer uncommon.

"Someone's just coming up to them and expressing their rage by taking a swing at them," Lieber said. "That's why the penalties and the deterrence really need to be up. That's why we're asking for this legislation."