"I thought to myself, 'Great, this is how I'm going to die,'" boater Scott Thompson said.
WABC
By Leo Stallworth 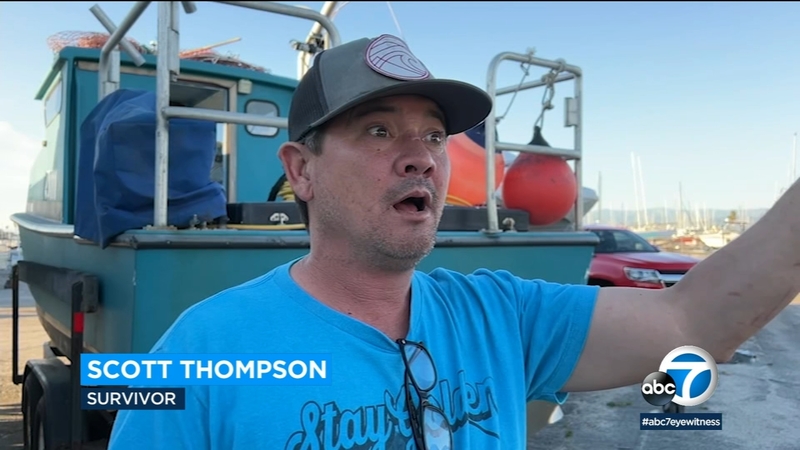 SANTA BARBARA CHANNEL, California -- Lost at sea, with no land in sight, a Southern California boater fell into the ocean and thought he was spending his final moments on earth.

Thompson accidentally fell out of his boat and into the water last month. He wore only shorts and a T-shirt in the middle of the frigid Santa Barbara Channel at night, miles away from land.

Panic set in as he watched his boat motor on without him.

"That's when I realized, like, OK, we got problems," Thompson said. "And I just started swimming as hard as I could, towards the boat, and it really didn't take too long to realize like, it's getting farther, I'm not getting closer."

Despite being an expert diver and experienced swimmer, Thompson felt the icy chill of the ocean and certain death creeping in.

"The panic set in it was like, 'Wow, this is a pretty heavy situation,'" he said.

Thomspon needed a miracle to survive against overwhelming odds. With no land in sight, he leaned on the love for his family to inspire the fight to live.

"Just keep swimming, you gotta get home to your family." Thompson kept telling himself. "I was devastating myself, through my mind, just picturing my girls and my son growing up without me, and my wife, you know, not having a husband to support her...I wasn't thinking about sharks or anything like that, until I hear this splash?"

To Thompson, that splash felt like an angel summoned to help him.

"It was a medium-sized harbor seal," Thompson said. "The seal would go underwater and he came up and nudged me, like a dog comes up and nudges your leg."

Thompson saw that as a divine sign that against all odds he could make it.

"Did it know, like hey, this human is in trouble, hey keep going dude?" he said.

After his interaction with the seal, Thompson felt determined to swim to the nearest oil platform, which was far but closer than land.

"'You gotta make it to the platform because you have no choice,'" Thompson told himself.

Freezing and exhausted, he kept swimming some five hours -- finally reaching the platform.

"It started getting brighter and I'm crying. And I'm like shouting at the sky." he said.

Crews aboard the oil platform rendered aid. The Coast Guard got him to a hospital where Thompson got treated for hypothermia and more.

"Even putting on a wet suit, being prepared, getting in that water, and swimming to the platform was horrendous," Channel Watch Marine Paul Amaral said. "I can't imagine being in the water with shorts and a T-shirt at night. There was no moon, I mean it was pitch black."
Report a correction or typo
Related topics:
californiaswimmingrescuesouthern californiaoceanssurvivor story
Copyright © 2022 WABC-TV. All Rights Reserved.
RESCUE
2 people pulled from Hudson River after jet ski collision
2 window washers rescued from scaffolding 42 stories up in Midtown
Kidnapped CA teen found in NY thanks to quick-thinking detective
FDNY ceremony reunites survivors with those who helped save them
TOP STORIES
NJ police impose curfew after large party gets out of hand
Empire State Building lit to honor Notorious B.I.G.'s 50th birthday
2 people pulled from Hudson River after jet ski collision
Man dies after collapsing at finish line of Brooklyn Half Marathon
Teen sought in 11-year-old shooting death also wanted for 2 robberies
White Sox shortstop accuses Yankees' Donaldson of making racist remark
Heat Advisory issued ahead of possible record-breaking temperatures
Show More
AccuWeather: Still steamy
Some peanut butter recalled for potential salmonella
Why a NJ teacher keeps an empty chair in his classroom
Puppy stolen from NJ pet store returned unharmed
Early Voting holds off Epicenter to win Preakness Stakes
More TOP STORIES News