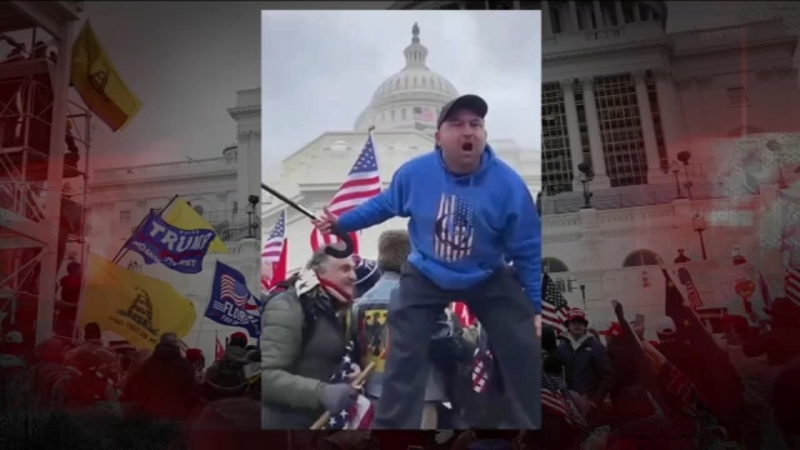 NORTH CASTLE, New York (WABC) -- A man from Westchester County has been charged in connection with the Capitol riots.

26-year-old Brian Gundersen was charged after he was recognized from his Byram Hills High School varsity jacket, which he wore at the Capitol riots several weeks ago.

Gundersen is one of many local arrests that have been made since the Capitol insurrection on January 6.

The North Castle police chief says he contacted the FBI on January 12, stating that he had information relating to the Capitol riots.

RELATED | 'This is me': Man who pointed arrow at himself latest NY Capitol riot arrest
EMBED More News Videos

Stacey Sager reports on more arrests after the Capitol riot.

The chief claims that the Superintendent of Byram Hills High School and people in the community recognized the varsity jacket after seeing video of the riots.

The chief identified the suspect as Gundersen, who played varsity football for the high school.

The high school said it could not comment on the matter.

Another anonymous tip provided the FBI with a Facebook account, which came back to Gundersen, who was seen wearing the same jacket.

Last week the FBI interviewed Gundersen, who admitted to attending the January 6 rally in support of President Trump.

Naveen Dhaliwal has the latest on more local arrests connected to the Capitol riot two weeks ago.

However, he initially denied being part of the Capitol insurrection.

During a subsequent interview, he allegedly admitted to going into the Capitol on January 6. He told investigators he was there for 10 minutes and that he was pushed into the building by the crowd, according to the criminal complaint.