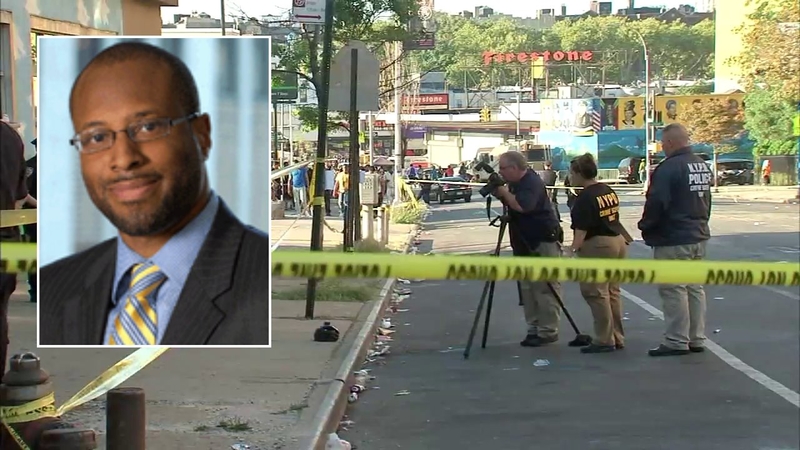 Aide to Governor Cuomo shot in gang gunfire in Brooklyn

CROWN HEIGHTS (WABC) -- An aide to Gov. Andrew Cuomo remains in critical condition after being caught in the crossfire between two gangs in Brooklyn.

Carey Gabay, a 43-year-old first deputy general counsel at the Empire State Development Corp., was shot in the head during a pre-dawn party celebrating the West Indian Day parade on Monday.

NYPD officials said Gabay was with his brother and friends on Bedford Avenue near the intersection of Montgomery Street in Flatbush at about 3:45 a.m. when they walked past an argument where shots were fired, and he tried to avoid getting hit.

According to police, Gabay appears to be an unintended target. He was caught in the crossfire of two suspected gang groups. He ducked behind a parked car but was struck in the top of on the head. A semiautomatic weapon was recovered and 16 shell casings indicate two groups firing at each other.

Cuomo called the 43-year-old Harvard-educated lawyer "an outstanding public servant" who joined his administration in 2011.

The shooting was one of several outbursts of violence in the neighborhoods surrounding the parade. A 24-year-old man was fatally stabbed near Grand Army Plaza.

There have been no arrests in the shooting or stabbing.

"It's mortifying, my best friend got shot in the head," friend Kevin Cummins said. "We all got up and walked around to make sure everybody was OK. I walked around and I saw Carey lying on the floor, and I can't believe it, I just started to cry, but then his brother was there and he just lost it," Cummins said.

Cummings said even though they all ran and ducked for cover, Gabay still got shot in the head.

New York Attorney General Eric Schneiderman tweeted to the well-respected attorney, "My thoughts and prayers are with Carey Gabay and his family. He is a wonderful public servant and I am hopeful for a speedy recovery."

My thoughts and prayers are with Carey Gabay and his family. He is a wonderful public servant and I am hopeful for a speedy recovery.

.@NYGovCuomo the @NYCCouncil family extends thoughts & prayers to you, to Carey Gabay & the Gabay family. The gun violence must end. #peace

"He's breathing, not on his own, but with a respirator," Cummins said. "They gave him a blood transfusion, everybody should pray because he could pull out of it," Cummins said.

Police Commissioner Bill Bratton said another shooting in the hours before the parade also appears to be gang related.

"That's traditional crime, unfortunately, that we deal with in this area all the time," he said. "It's unfortunate that it occurred during this event but that's no reason not to go forward with the events."

Cuomo spoke with Eyewitness News following the shooting, and he said the violence is pointless.

"This was a beautiful man, a sweet man, a man who was giving back to his community, a gentleman, who was involved in nothing, just walking down the street with his brother, wife," Cuomo said. "He was the lawyer who rewrote the rent laws that protected so many tenants. I'm going to see him now. It's a reminder that the violence has to stop."

Mayor Bill de Blasio also spoke about the incident at the parade:

Our prayers are with Carey Gabay & his loved ones. Another heartbreaking reminder of our fight to get guns off our streets.

The shooting was among other violence that broke out before the annual J'Ouvert Festival that left one person dead and four injured, including Gabay.

Before being appointed Gov. Cuomo's first deputy counsel in January, Gabay served as assistant counsel to the governor since 2011, according to his biography on the govenor's website. Prior to working for the governor, Gabay was a banking and finance associate at Jones Day from 2007 to 2009, and a structure products associate at Schulte Roth & Zabel LLP from 2002 to 2007. He has a B.A. from Harvard College and a J.D. from Harvard Law School.