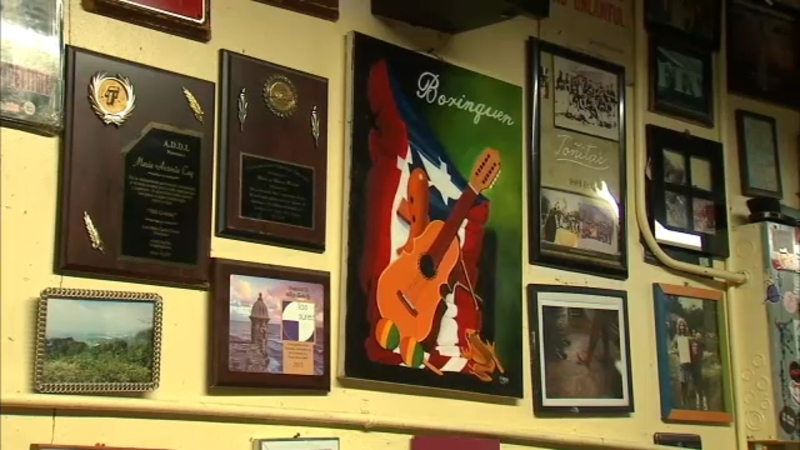 WILLIAMSBURG, Brooklyn (WABC) -- Williamsburg has been a hub of Puerto Rican culture in New York City for decades, through all the many changes in the neighborhood.

One classic Puerto Rican social club in the neighborhood has been going strong for nearly 50 years and is the last of its kind in Brooklyn.

The Caribbean Social Club on Grand Street has survived those changes and continues to bring generations together, thanks to the woman who opened it in the 1970s and has held on.

And if you wanted to know what Williamsburg and its Puerto Rican community were like back then, it's been perfectly preserved.

The club is better known as Toñitas, for its owner Maria "Toñita" Cay, who insists not much has changed at all.

And she says it's all about the people -- newcomers and old timers -- enjoying some cold ones, shooting pool, and connecting, in a space full of happy memories that started as a home base for a community baseball team.

"They feel like they're home, so they come," Cay said.

Like other social clubs that did not withstand the city's changes, it was always a home away from home for those who left Puerto Rico for the big city.

"She loves having people in her place, having fun," club regular Giovanni Carbonell said. "That's what she enjoys."

On weekends, you can find her behind the bar, serving $3 and $4 beers to a crowd enjoying music and dancing.

One reason the club has been able to survive is that Toñita doesn't need to pay rent. She owns the building. She lives upstairs, and she wouldn't dream of selling.

"I've asked, why haven't you gone to Puerto Rico?" Carbonell said. "You could just retire and just live over there and get a house."

But this, to her, is home, and her "Mi casa es su casa" generosity has built a community of volunteers who'd do just about anything for her.

"I know she doesn't expect anything in return," Carbonell said. "But we naturally want to give back."

Toñita's generosity, her signature sparkly rings, and the time capsule she's created have become legendary, and the club even gets visits from celebrities like Bad Bunny. And yet, so much remains constant.