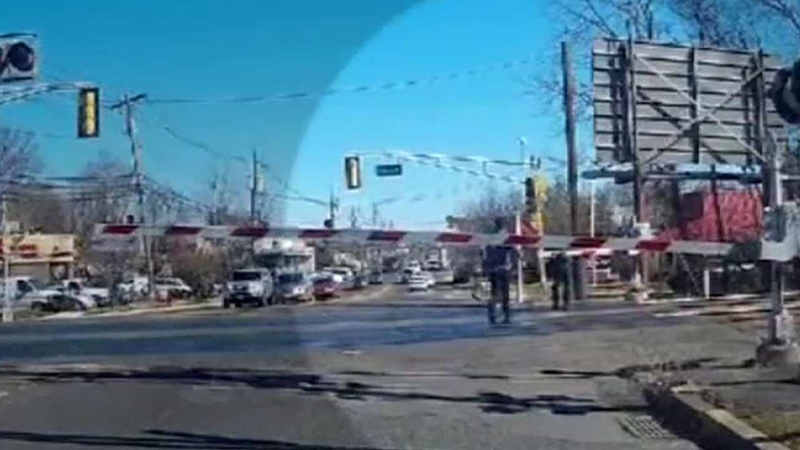 SADDLE BROOK, New Jersey (WABC) -- An elderly woman was crossing in front of an approaching New Jersey Transit train when a driver leapt from his car and rushed to save her, with seconds to spare.

Hunched over with two canes propping her up, walking from point A to point B is no easy task for the elderly Saddle Brook woman.

So when she suddenly became trapped in the middle of the train tracks Wednesday afternoon with precious moments to spare, one Good Samaritan didn't hesitate to pull her out of harm's way.

Watch video showing Good Samaritans run to get an elderly woman out of the way of an oncoming train.

Panic quickly overwhelmed Jon Mango as he sat inside his car at this Saddle Brook Railroad crossing, watching the elderly woman struggle to place one foot before the other while crossing the tracks.

"I'm watching and I see her going across and I'm like, 'this isn't feeling right,'" Mango said.

As the crossing lights began to flash and the nearby speeding train sounded its horn, Mango could be seen on the dash cam video jumping into action.

"I saw the train was really coming. I sprinted onto the tracks and I pulled her by the arm. She was scared, like I was trying to do something," Mango said. "She actually stopped because she was scared, so then I tried grabbing her arm and then really tried pulling her. She was having a lot of trouble."

Mango says by the time they reached the other side of the tracks the train just narrowly missed the woman by a matter of inches.

He admits he actually crossed paths with the same woman at a nearby drive through just minutes before, but never thought their lives would intersect like this.

"I'm not a hero, I'm not anything. I just saw something and something needed to be done," Mango said.

Police and paramedics were called to the scene and the woman was taken to a nearby hospital as a precaution.