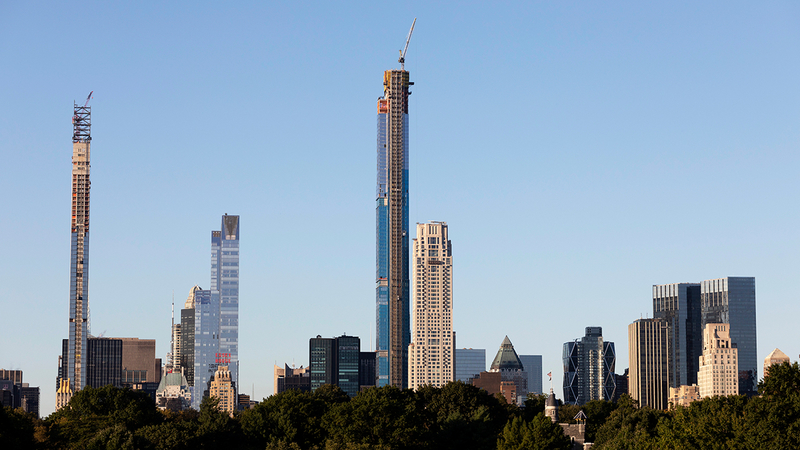 NEW YORK -- A New York City condominium tower will be the world's tallest predominantly residential building when it opens next year, though it will be competing with other ultra-luxury buildings for billionaire buyers, the building's developer said Tuesday.

"We have to price it at a reasonable range for this type of product," he said. "And we have to be flexible when we're selling the really large units."

Apartments now listed on Central Park Tower's website range from $6.9 million for a 33rd floor, two-bedroom to $63 million for a 112th-floor, five-bedroom.

Barnett spoke at a "topping off" ceremony Tuesday to celebrate that the still-unfinished tower on Manhattan's so-called Billionaire's Row has reached its full height. Curtains dropped as Barnett pushed a button, revealing panoramic views from what will be someone's 107th-floor living room. All of Central Park was visible, as were landmarks like the Chrysler Building and the George Washington Bridge. One block east was the huge crane helping to build 111 West 57th Street, a rival supertall tower that's also scheduled to open next year.

Critics have complained the tall, skinny towers proliferating along the southern edge of Central Park over the last few years are casting shadows on the park, but Barnett dismissed those concerns. "We've done shadow studies," he said. "It's just a question of, you know, occasionally somebody might be sitting somewhere in the park and there'll be a shadow for, I don't know, 20 or 30 minutes."

Extell secured the right to build Central Park Tower by buying 6,000 square feet (560 square meters) of "air rights" from surrounding buildings. Its 1,550-foot height makes it even taller than One World Trade Center without its crowning spire.

Central Park Tower will be the world's tallest building that is mostly residential, although there are other buildings with a residential component that will be taller.

Extell's partners in the project include Nordstrom, which is building a seven-story department store at the building's base.